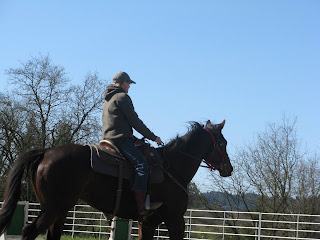 This was a challenging week in our horse world. Not entirely without flashes of hope - though on some occasions, it was merely the hope that one could stay in the saddle long enough to turn the ride around into something more positive than a rodeo session.

On Tuesday, I got to the barn after Steve - as usual - and saw a plume of dust rising from the outdoor arena. As I walked down the alley, I saw Steve and Lena flying - oh, yes, I mean flying - around the corner and one of our barn mates off her horse trying to blend into the rails of the arena and stay out of the way. I had apparently missed Steve running that bratty spotty horse into the fence to stop her. She had spooked because there were two women walking (leading, really) two horses along the bike trail and for whatever reason, Lena thought that was just too wacky for her to deal with. Or, more likely, she's in season and had herself all in a twist for no other reason than she was in the mood to have herself in a twist.

I decided not to ride that night, but did spend some time grooming Bar and talking to him, which he seemed to enjoy.

Thursday night, he was at his worst. At the time, I wasn't really sure why, though I wondered if it was the new saddle pad combination I was trying, or maybe the neoprene cinch wearing away at his chest and sides. However, after my lesson today, I don't think so. (Though he did seem to be more comfortable in the mohair cinch we bought to replace the neoprene.)

When I say worst, I mean worst for me so far. He was fine letting me get on, calm at the walk, and went over the poles with no problems. The minute I asked him to trot, however, he tossed his head, danced sideways, bucked, backed up - basically found any way he could to not do what I was asking him to do. I did finally get him to trot circles for me in both directions, but it was all I could do to not scream in total frustration. I did manage to stay on throughout all his antics, which seemed to take him a little bit by surprise.

Sometimes it feels like we take two steps forward and seven steps back. By the time I got home Thursday, I was pretty disheartened and frustrated. After Steve rode Bar on Friday, he understood why and told Bar he was lucky I hadn't strangled him.

But then I rode Lena Friday afternoon and all of the things I've learned riding Bar, combined with having more confidence in Lena, gave us a really ride together. She was relaxed, I was relaxed, comfortable in the saddle, fluid through my hips and pelvis. She did try one minor spook, but all I did was check her with the (loose) reins and she focused her attention back to the task at hand.

So I thought about that some, about how my confidence level in Lena makes so much of a difference, and vowed to try to trust Bar a little more. I'm always a little on edge with him, waiting for his next antic, his next explosion. With her, I was in a better place with both my body and my mind, so all I had to do was let her know I was indeed paying attention - without panicking - and we could stay on track with our ride.

All that was before today's lesson, which reinforced all of that, plus gave me a few more tricks to use when he starts acting up and being stubborn. One of the things Peter said was, "Pretend to trust him, but still be alert and ready for him." It sounds contradictory, but it's not really. Part of my struggle with Bar is that I anticipate him blowing up, tense up, and feed into the blow up. I did the exact opposite with Lena and it stopped almost before it started.

In complete contrast, my lesson today was made more interesting by chainsaws and a wood chipper running on the bike trail somewhere, plus the mules next door running back and forth frantically. I knew Bar was paying attention to them, but during one of Bar's dances, Peter pointed out that Bar was less bothered by the noise of the chipper than I was; that I had tensed up in anticipation of Bar acting up, which led - naturally - to Bar acting up.

I need to channel some of the confidence I feel with Lena into my riding with Bar, as hard as that may be, because I've felt it make a difference. Not only with Lena, but when I'm riding him as well.

There are other things as well, like catching him and distracting him from acting up; not holding his head too tight and giving him an excuse to rear; keeping him moving forward and not letting him get away with refusal. (Which, by the way, is a new tactic for him.) Bar? Not go forward? Something must be wrong with him physically! No, actually, I think he just figured out that bolting forward didn't get him his way, so this was a new trick. Too bad for Bar, Peter knows that trick and taught me how to make it less profitable for Bar to balk than to continue moving forward. Circle, kick with the inside leg, let that outside rein go so I'm not somehow inadvertently (or subconsciously) telling him to stop, and once I get that forward motion, straighten him out and keep going.

So as frustrating as this week has been for me in some ways, I have learned a tremendous amount. Applying it may be tricky, but the balance between the two horses - and my own reaction to each of them - has opened a really important window for me, one that will no doubt continue to improve my riding if I allow myself to absorb the light that has come through it.
Posted by Jessica Boyd at 12:34 PM