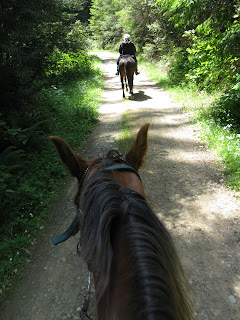 We took the horses out today and introduced Bar to uphill and downhill. For the most part, it was pretty successful. He got a little tired going uphill - shocking, I know - and a little nervous going downhill. Steve rode him up and he did okay for the most part, but Lena definitely has the edge - and the rear end - going up steep hills. At least right now she does. 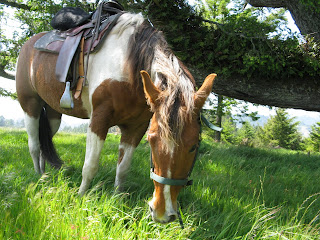 We stopped and all of us had some lunch. You can see how differently they are shaped, though both are tall and leggy. (Hence the demise of Lena's cutting career and the success of Bar's racing career.) 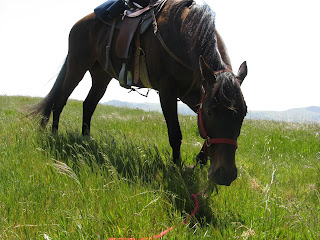 I rode him down and we did have a bit of a Jess/Bar nervous moment because he thought trotting down the hill was the best way to deal with being unsure of his footing and I thought perhaps we should slow down and watch where our feet were going. I did start to get scared, I admit it, but we worked through it and managed to get down the first hill without too much of a ruckus. Of course, that may have been because I decided that relaxing was a better plan than getting into our normal feeding frenzy of dual anxiety.

He wanted to be in front, but he's so concerned about his footing and doesn't really know what to do, so would sometimes stop mid-trail and start to turn around. It's a little hard to explain to 1,200 pounds that there will eventually be downhill no matter which direction we end up going. I'd circle him back around behind Steve and Lena and Bar would take the rear, watching where she placed her feet and dropping his head to really pay attention to where his own feet were going.

I also had to get off and lead him over a couple of obstacles, like a creek and the first step off over a rock in the trail, but he got more confident as we went along and near the end of the ride actually led Lena past a big, scary rock laying in wait mid-trail to eat unwary horses.

The ride was not without injury, though nothing too serious. While getting out of Bar's way over the first rock step-down, I stepped off the trail into a hole and knocked my knee on what appears to have been the sharp edge of a rock. But he waited for me to regain my footing, didn't rip the reins out of my hand and go tearing off down the trail, and stood still while I got back on, so we are making progress. I also have a bruise on my heel because I foolishly didn't stay to one side as we crossed over a raging trickle of water. Well, I crossed, he leaped. Mustn't get those dainty feet wet, apparently. My fault, not his. He didn't keep going and again stood nice and still as I got back on.

He's funny. He gets so torn between not wanting to face whatever it is he is nervous about and not wanting to lose sight of Lena. Mostly, Lena wins. And mostly he knows I haven't done too much crazy stuff that gets him hurt, so he goes along with me even when he's not sure I know what the heck I'm doing.

All in all, a good day and a really good learning experience for him. Neither horse was particularly willing to get back into the trailer and seemed like they'd have been content to doze in the sun by the trailer for at least a little while longer. But they were also glad to get back to the barn just in time for dinner! 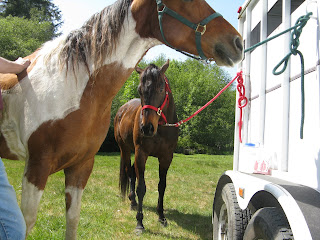