The dark and the cold 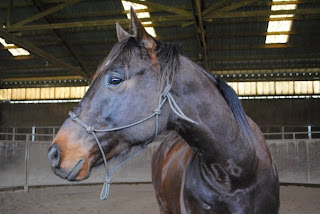 Bar several months ago.. when it was not DARK when I got to the barn

I loved the time change the morning it happened because it made me feel oh-so-efficient. I had so much more done an hour earlier than normal! It was fabulous!

I actually left work on time a few times this week--an extreme rarity these days--and it was already dark (DARK) by the time I got to the barn. Even the full moon, while lovely, wasn't quite high enough to help most of the time.

It's not only dark, but it's cold. Cold for me, anyway. I live in California, so I consider 45 degrees cold. I know. I'm a wuss. I'm sure if I lived in the snow, I would acclimate. But I'm not moving so I'll take my 45 degrees and tough it out. As you colder weather folks know, there is only so much bundling that works with riding. You do have to be able to move a little, right?

The cold also affects joints--both mine and Calabar's. He takes a little longer to warm up this time of year and he's not so hot to go racing off. I know that seems odd, and sometimes he does bounce around like a hot, fresh horse in cool weather, but not usually at night. At night, he acts like things are not as flexible as they could be, preferring the trot to the canter until things flow a little better and creak a little less.

I tell him I completely understand. I have even been known to do knee bends to demonstrate that his are not the only joints that make fearful noises. He usually looks at me dubiously at this point. "What does that have to do with me?" he asks.

It has to do with the fact that I know movement is the best therapy, so let's both keep at it. Even just a little. Because it's oh so much work if the parts start to seize up.

Someday, we both may believe me.

I'm not crazy about the time change either. We're all still trying to get used to it. I hear you about the joints in the cold too. One of these days I'm actually going to try the glucosimine/chondroiton/supplements for myself and see if they help.

You're not a wuss 45 degrees is cold. We're up and down here, it was almost 70 the other day but drops dramatically at night.

But 45 degrees here, at the coast, is a "moist" cold, whereas in snow country they have "dry" cold. I've been in Tahoe at 20 degrees that feels warmer than 40 degrees here. At least, that is my story, and I'm sticking to it. I am also sick of freezing my @*%*## off here in beautiful Northern California.
Have fun at the clinic tomorrow!

Feels warmer because snow's dry? I beg to differ. It is very seldom fluffy. Usually wet if not soggy.

But I'm sure 45 feels cold in Northern California, When we got to Berkeley, we said, "Cold? This is cold?" But by the next season around, we were cold.