Outside the comfort zone 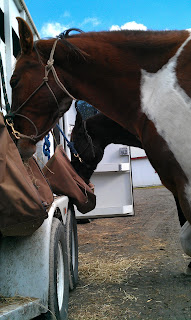 Getting us out, way out, of our comfort zone was a good thing for both Bar and me. It was not an easy thing, and I don't just mean the whole rigmarole of getting horses in trailers, going to a new place and doing something totally different.

What is hard, what is breaking my heart, is the realization that I have boxed in my horse It hurts--even though I know the whys and the reasons--that I've removed Calabar's "go" instead of finding a way to channel it into productive movement. I have a better sense of that, now, and will eventually stop beating myself up.

There is a silver lining, to this, though. I have to push him because he's doing what he thinks I want, what I've told him time after time after time is the right thing--don't go fast, hesitate when you don't know what I'm asking. He is listening to me, I just have to change what I'm telling him so we both get better.

The other positive note is that we did get out and do this new and somewhat scary thing and--after a bit of a rocky start--we all learned something.

Both horses loaded wonderfully, even Calabar needed little encouragement to climb in on our way to the day's adventure. The drive to the facility was short--10 minutes, tops--and uneventful, and unloading was calmly done.

Things got a little dicey with both horses when they began to notice the activity level around them--a group lesson in one arena, geese and a pond to our right, someone shooting something off nearby, a horse jumping in the arena behind us AND a hot air balloon low on the horizon.

Lena held it together fairly well, but Calabar needed a reminder (read elbow to rib cage) that just because he's freaked out, he can't forget I'm standing there.

He has always reacted with a lot of energy, shall we say, to new situations--particularly new situations with lots of horses doing lots of different things--and yesterday was no different. After Steve and Lena went up to the jump arena to warm up, I climbed on Bar to follow. He was not being good. Dancing, spinning, not listening. So I got off. And we did many circles in the driveway until he could walk next to me without dancing past me, allowing me to reward him by going to where Lena and Steve were.

He still wasn't settled, though, and the sight of many colorful jumps did not help. "WHAT?! You want me to jump? What do you want me to do? Where is Lena? Why is she over there. WHAT ARE WE DOING HERE???" I think that about covers what was going on his fuzzy Thoroughbred brain. I kept him circling around me, away from me, changing directions, whatever speed he needed to go--as long as he didn't run me over--until he was circling me at a walk. I tried to hard to be his oasis, to be calm and steady while he danced around, and when he was calm, he could come in for a head scratch. Luckily, he did manage to stop levitating in time for our session.

There are no pictures of the session, sorry. We rode together and, as it turns out, my camera battery was dead anyway, so my words will have to suffice.

Ellen started with me and my stiff self, and gave me a vision. Move with his front feet, feel them, let the rest follow. Oh, and sit up straight, push into my feet. Funny that the "in the feet" bit sounded a lot like Ike. "If you're in your feet, you're ready for what they might do." Right. Ike said that too. Where did I forget it?

Here's where the spotlight hit me. One of the things I needed to do was push Calabar forward, get him to go. Where he used to launch himself into a big, swinging walk I could dance with, he now plods along, waiting for me to stop him from going too fast. In trying to do what I want, he has compromised his own beautiful movement.

As I said earlier, the good bit of that is that he is trying to do what I want. So I need to want different things, or at very least give him an outlet that gives me control and doesn't shut him down.

Ellen gave me a tool. Not the one rein stop, no--the one-rein-move-your-butt-over. This one simple movement accomplishes a couple things. One, it redirects the energy, allowing me more control and more safety; two, it teaches him when I pick up the reins, he needs to do something with his hind end. The latter will be something we can build on.

You could see the wheels turning when I slid my inside hand down and pulled his head out. "Oh, you want my head. Here it is. Um. You're not letting go. Can I bob my head up and down and make you let go? No. Hm. What are you asking me to do??!!"

It occurs to me as I write about it that my horse and I are so very much alike. The first few times we tried it, as Bar struggled to figure out what I wanted, I asked Ellen if I should nudge his butt with my foot. The answer was, "No. Just wait for him." He bobbed his head and played with his bit, I was convinced he needed another cue and was ready to deliver it to help him, fairly humming with restraint.

However, part of the problem was that he had physically blocked himself in with his outside rear and couldn't move onto it to move his hind end over, so all my extra pushing would only have frustrated him more. It took a few tries--and my perpetual personal challenge, patience--but he got it. First, all he had to do was shift his weight and I'd release the rein, but gradually we got to where as soon as I slid that hand down the rein, the hind would move over and I'd release. The goal, the thing I need to work on is a) making sure it's his hind end moving over and not his front and b) if he walks off from there, letting him. We did this over and over and he should have gotten irritated or frustrated. But he didn't. He got looser and softer and more responsive. When  he would start to get fidgety, we'd walk for awhile, Bar teaching me to feel those front legs and move with them.

Ellen said she had a Thoroughbred once that when things would get out of hand and he'd get nervous, she'd go to this exercise. He knew it, he'd relax because he knew it, and things would de-escalate. Bar is like that. If he knows what you're asking, he calms down and does it. Part of our problem is me not knowing how to ask and him not knowing what I'm asking, so having a trick like this--a tool to use to remind him he does know something and I do know how to tell him to do it--is a gift.

We got to use the new trick in real life, even. While Ellen was working with Steve and Lena, Bar and I worked on feeling his front legs up the side of the arena. Then, I don't know, a moth flew by, and he danced. And I reached down and moved his butt over and he stopped.

So next up is telling him it's okay to move forward again, go with him when he does it, and correct him only as needed. I'd like to be able to do this without a Dressage whip or spurs, but I might have to use one or the other until both of us believe me. Ellen offered Ike-like advice, there, too. As long as they know it's there, that's really all you ever need.

As for Steve and Lena Rey, they got to do some more active things and she showed off her athletic side and beautiful sensitive self. They worked on things like lateral movement to get Steve in the right place for Lena to be comfortable and confident in her own movements. Ellen thought Lena was quite lovely and said so. Lena heard her, too, and you could tell. If a horse could bat her eyelashes, Lena did.

Lena likes her rider to be balanced, as do all horses. She's just super sensitive to it and has been known to give her opinion by way of bucking, crow hopping, or doing the shoulder drop and spin that dumped me off last year. Bar, of course, is no saint in that area, but he has gotten to where he will tolerate my lapses most of the time. It would be better if he didn't have to, though. 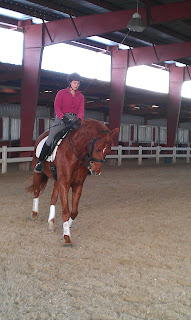 After our session, we got to watch the beauty and grace that Katie Dougherty-Kunde and Willoughby create together. While I was watching, Ellen pointed out that everything Katie was asking Will to do was based on the very simple things Steve and I had done with Lena and Calabar. I had been feeling like I hadn't done all the things I set out to do in the lesson, but that helped me realize that I'd done more than I thought.

Bar and I had traveled way outside our safe little box and we'd done pretty well, all things considered. Steve and Lena had also found new ways to work together that they both enjoyed.

We all survived, we all learned and we all enjoyed the experience. More than that, I see a pathway to helping Bar be the horse he is meant to be and still have me as his rider. Peter used to tell me to "liven" Bar up, and now I see not only what he meant but why and how to move us along.

Outstanding! Good for you for taking on the challenge - it sounds like it was more than worthwhile.

Great clinic. Sounds like you had a great time and learned many new movements to help you and Bar be wonderful together.

Wow! Sounds like a great time and she sounds like an excellent teacher. Wish she was closer. That moving the hindquarters trick is extremely useful (like disabling the drivetrain). Don't beat yourself up, you're doing your best to learn and that's all anybody can ask. I know the feeling, after Wednesday I feel like I need to start from square one.

Hooray, what a wonderful experience for everyone. We all have better horses than we think:)