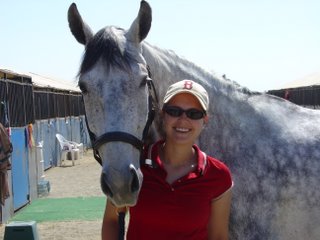 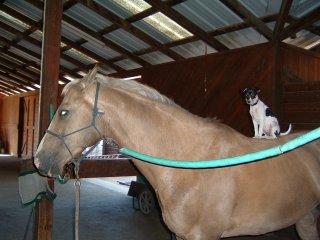 I stared riding when I was eight year old. I had just moved to CA from Boston and my parents had sent me off to a horse camp for a week during our first summer out west. I was hooked. I continued riding through elementary school and Jr. High, begging for a horse each day. I used to think that someday I just might actually catch a loose horse by house so I had made my own rope halter just in case. Finally five years later, after convincing my parents that there was no way to save me, they gave me the go ahead. After a year of searching for a safe trained horse, I ended up buying Bee (the palamino), a three year old with two months of training on him. Great. Needless to say it was a learning experience. I grew up with that horse. I took him to college with me at Cal Poly, San Luis Obispo. At Cal Poly I helped to start the Dressage Team, which introduced me to some of my best friends today (yes, more crazy horse girls). I started to reach a point in my training with Bee where I s realized he had reached his potential in the sport of dressage and to continue to push up the levels would no longer be fair to him. I was lucky enough at the time to start looking for another competition horse. I set out with my trainer and ended up getting Fenway (the grey horse). It was love at first sight with him and I knew right away that we were meant to bee together. I've successfully shown up to Prix St. George, when then of course he suffered an injury and a battle with ulcers. Figures, you dream of riding the upper levels and once you get there.....Boom. After a season off, he is coming back nicely and I look forward to hitting the ring this next season. So yes, I've always loved horses and have always been obessed with them. They're just so incredible in a multitude of ways.

The dog on Bee's back is my god-daughter, Twiggy. She is a 3 year old rat terrier but she was just a puppy when we took the picture.
Posted by Katie at 10:35 PM

Wow, what a great start of a blog... and I'm still waiting for a Cinderella finish on down the trail! Good Luck!

Ryan said...
This comment has been removed by a blog administrator.
2:09 PM

Your story brought tears to my eyes. The journey between horse and rider is so poetic and moving.