I love other people's dogs

We have a very dog-friendly office and a lot of my co-workers have really great dogs - like Huck! It's a great place to get a dog fix without having to commit to having our own dog.

That's a good thing because we currently feed seven (!) cats, including four of our own. Steve says he only has one cat - Tigger - but two other cats moved in on their own, and then I brought mine, so we're up to four. The neighbor's three cats hang out on our property more than their own, which is how we get to seven. There were eight, but the local tom cat must have moved on.

Tigger is the king, though. He is not spotty, though, he's stripey. He's 16 or 17 years old - Steve can't remember - weighs all of about 5 pounds and has 6 toes on every foot. When he was a kitten, he apparently looked like he was wearing snowshoes. He has the softest fur I've ever felt - like rabbit fur - and does have a bit of small-cat attitude. 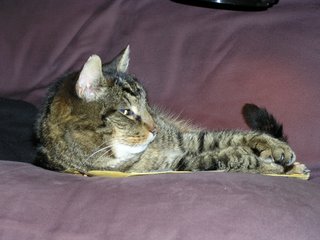 One of the things we'd love to do would be to somehow introduce Tigger and Lena. But since we couldn't get a trailer up our road and we can't imagine putting Tigger in a car, let alone a cat carrier, we haven't quite figured out how that might work. Oh, well.
Posted by Jessica Boyd at 2:48 PM