Back to the beach 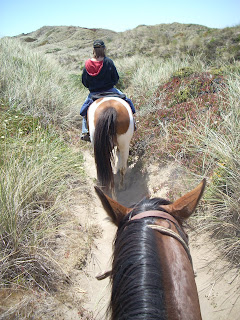 I have my computer back and free time to post, so I'll continue on with the blogging about the last trip to the beach. I know you were all hanging on the edge of your seats in anticipation, right? Just like Katie is hanging off the left side of the saddle in the above picture. She didn't believe me until I showed her several shots with same amount of, um, off-ness. 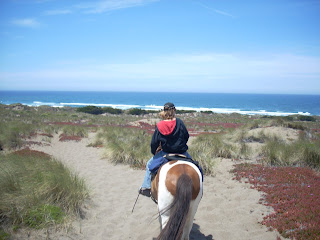 Each time we go out, it gets easier and easier to load Lena - both before and after the ride. I think she really enjoys our excursions and, hey, anything is more fun than circles in the arena.

Doc discovered the loose corner in the new window screens Steve installed a couple weeks ago. I looked in my side mirror on the way to the beach and there was this brown nose poking out. Luckily, he couldn't get his whole head out and Steve tightened that corner down after we got back. Here is Steve installing the screens with superior skill and equine assistance (I know, it's crooked, I'll fix it later): 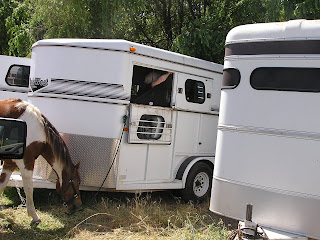 We succeeded in getting them closer to the water this time - much closer - but they still thought getting in was for crazy horses. We did see a couple horses get in up to their knees, but when we were going back and saw them on the trail, Lena decided that they were too silly to follow and went the complete other direction. 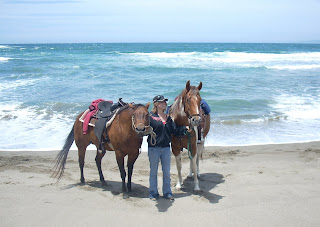 I managed to get us out to the beach without any major mishaps and Katie and I found the picnic area with hitching posts - after we'd already had lunch, of course. I need to get a map because I'm not sure we can find it again. Ha!
Posted by Jessica Boyd at 2:48 PM