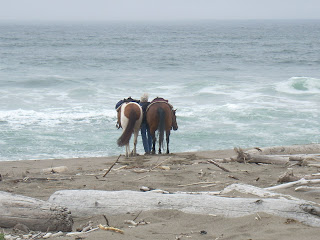 Let me preface this post by saying I'm officially fired as the family photographer.

I still took some great pictures of our beach adventure today. So there.

It all started with Lena rather calmly tied to the trailer while Steve attempted to catch Doc. For an old guy - Doc, not Steve - he moves pretty fast when he wants to. Finally, using carrots and some sibling rivalry between Doc and Taffy, we captured him.

We actually decided to load Doc first, to see if that would make Lena easier to load. It sort of worked. We only had to wave the stud chain at her instead of using it. Doc was in and that was good, but the space to maneuver was now smaller than she was used to. She did get in, though, and we were off - with me driving to get my hauling practice. Steve is pretty good for a back-seat driver, but it's still a new experience for me and takes some getting used to.

Doc is older and a much more experienced trail horse, but Lena watches over him, too. We let her go first, dealing with scary yellow-flower bushes and rust-colored ice plant, all the way to the beach. 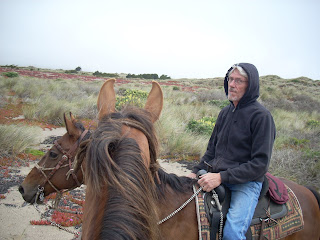 Here is the scary yellow-flower bush: 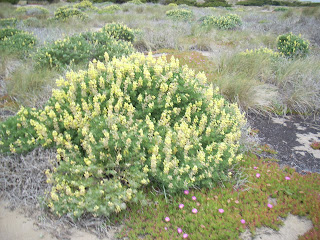 We got to the beach and things were okay, though both horses seemed a bit concerned with the large and energetic body of water they could see.

We took off their bridles and tied them up to have some lunch - sandwiches in the sand - and gave appropriate carrot rewards. Lena pawed in the sand, then she and Doc inspected the hole she had made. 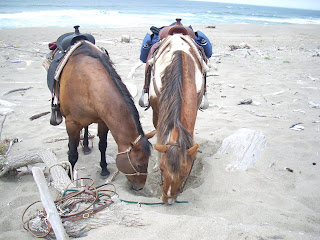 Then Lena decided to go over the log she was tied to, get her lead rope tangled around her front leg and get a little freaked out. In the moments that followed, half my ham sandwich - rather than the camera - ended up in the sand, but Lena listened and there was no major mishap. Phew. 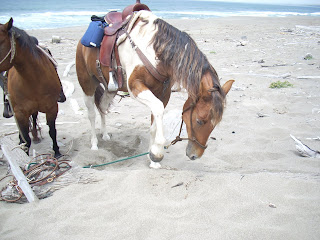 After I let Steve eat his sandwich, he took Doc and Lena - not Doc O'Lena, to whom they are both related - down to the water while I finished the rest of my non-sandy sandwich.

They were less nervous and more curious being led than they were with us riding, but the ocean being big and powerful, there was some amount of trepidation on the part of our equine buddies. Here they are inspecting the rather circuitous route they took to the water's edge. 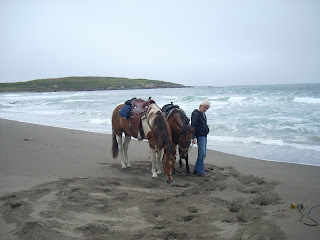 And here is Steve managing to stay out of the way of eight horse feet - a feat which takes a lot of talent most days. 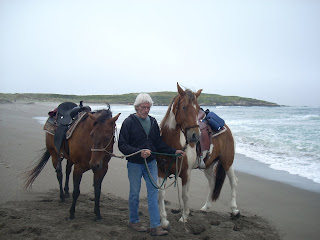 All in all, a great day. Good exercise for the horses and for us and a beautiful day all around. Except for trying to get Doc's fly mask on after taking off his halter. Didn't happen, sorry Carey! Next time: fly mask, then halter removal!
Posted by Jessica Boyd at 6:10 PM