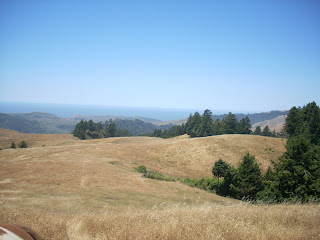 We took the kids out to a new place today, very private and quiet, and with a nice sea breeze to keep things cooler than they were inland. The shot above is from the ridge we got to after the climb up. Yes, that's Lena's butt in the lower left corner. Oops.

Of course, it wasn't all that easy to get rolling today - Doc wanted to run around the pasture for awhile first, even after I took Taffy out and tied her to the trailer. Steve waited for the circles Doc was running around in to get smaller and Taffy got a massage and beauty treatment from me. Lena spent the time tied to the trailer, calmly munching on alfalfa.

Eventually, Steve got Doc and we turned Taffy back out in the pasture - much to her dismay - and got on the road without any fuss from Doc or Lena about actually getting into the trailer. Sheesh.

Doc and Lena have a little contest on the trail when it come to who gets to go first. She usually likes to, unless we come to something scary, then she'll let Doc go ahead -- just in case the mountain lion is hungry. But then she wants to be right back in front. Here she is attempting to pass on the outside: 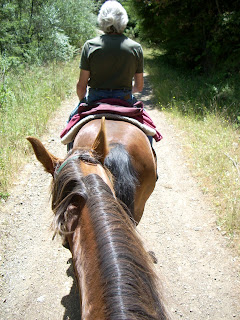 This picture seems to echo a theme for me - the rider in front over the ears of the horse in back. Big ears in Lena's case. Hm.

The trail in is a nice steady climb up, then it opens up into grasslands and a ridge with a great view of the valley below and out to the ocean. Plus a really cool Douglas Fir with ferns growing in (on?) it. 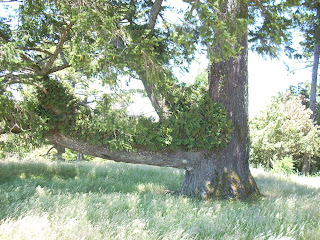 And look, here's a picture of me! From the front! Our new little camera has been great on the trail, but Steve would prefer if it had a view finder. The LCD screen on the back is great, until you're in the sun, then not so great. Have to add that to the wish-list, I guess. 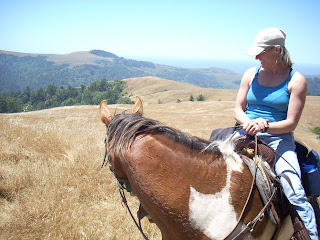 We also decided we need to get a collapsible water container and bucket to leave in the trailer to water the horses in places like this where there isn't any water system set up.

And finally - here is Steve in what I like to call the "Cowboy" shot, complete with waving grasses. He said it's not really a cowboy shot because he isn't wearing his cowboy hat. Oh, well. I like it anyway. 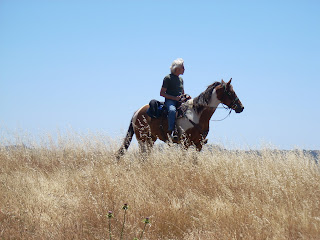