Escape from the arena 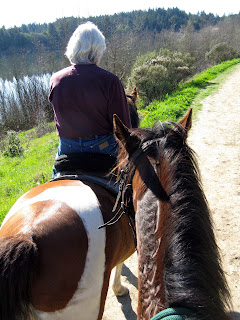 We took the horses out today on a long-awaited (by them, apparently) trail ride today and it went so well, I'm wishing I would have done this much, much sooner.

Neither horse was perfect, mind you. Lena snorted at logs and spooked at some ducks taking off, and Bar argued a little bit off and on over various things--particularly getting too far away from Lena--but overall, we had two happy, relaxed horses who listened and cooperated. A hiker even commented that we had such "calm horses, not like my horse," she said. We told her it was momentary at best, but I was still glad they were doing so well someone else noticed. Bar even went by two other horses and riders without even a single, solitary sidle or funky dance move! That was a first for him--he usually gets very agitated--and I heaped praise on his fuzzy brown head for acting like a grown up horse.

The only downside is that Bar lost a rear shoe somewhere on our way back, and now I'll have to hold off riding him again until Mike comes to remedy that.

They were so happy to be out on the trail again, I'm half afraid to ask either one of them to get back in the arena. Bar gets a reprieve until he gets a new shoe, but I'm not so sure that's a good thing either.

Fugly Horse of the Day posed a question today: What would you buy if you didn't have horses? Gosh, a lot of things, but none that would make my life as full and rich as time spent with my horses. Today was a nearly perfect day, a gift that goes beyond what it cost me in gas, feed, or even a lost shoe. I shared a blip in time with my horses and my friend as we moved together through our place in this universe at the rhythmic pace of hoof beats.
Posted by Jessica Boyd at 5:53 PM

Intriguing question: What would I spend my money on if I didn't spend it on horses? I think if I wanted to spend my money on something else I would. My husband gave me a choice between having a house keeper or buying a horse. I chose the horse. I think I tripled my workload with that one decision. But, I have no regrets.

Yeah.. no choice whatsoever, there. Now... you haven't seen my house, but boy are my paddocks clean. :)