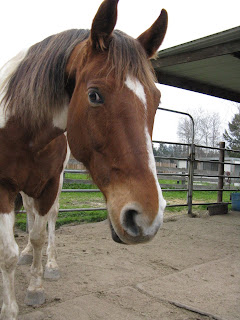 All of us sometimes think of Lena as the "easy" horse, forgetting she can be just as tricky to ride as Bar is. This has been known to lead to a false sense of security on occasion, as Katie found out just the other day. Though Lena is usually paying a little more attention to her rider, she can and does act more ditzy, which can put you on the ground just as easily.

Last Monday, we went to the barn and Katie got Lena out. Lena hadn't been ridden hard in about a week and Katie hadn't ridden at all in a couple months. Katie was also a little distracted about school, life, and a few other things and admitted after the fact that she should have been paying better attention.

Hard rain hammered a steady drone of noise on the tin roof of the indoor arena and Lena was antsy and distracted. Katie started to come around the round pen and Lena leaped six feet sideways in a split second. Katie didn't stay with her and I felt that weird parental calmness come over me as I watched her slide off and land in the soft arena dirt, still holding the reins. Slow motion, indeed.

Katie was fine--embarrassed, but fine--and got right back on and continued with Lena's work out. This is only the second time she's come off a horse, and the other time was Bar who was trying much, much harder. Katie's conclusions were two-fold: you can't zone out on Lena, either, and she needs to get back to riding more regularly.

What did Lena spook at? A couple of brooms upended in cones that hadn't been in the arena the last time she'd been ridden. The next day, I spent a lot of time going up to, past, around, next to, and between them. We finally got to the point that she nosed them tried to pick them up instead of veering away from them, but it took a little while, plus a lot of calmness and encouragement on my part, to get her there.

Bar, on the other hand, took one look at them and grabbed ahold of them to pull them up and down in the cones. I had to work with him to ignore them and not play with them every time we went by!

Two different horses, two sets of challenges, and one lesson. Peter says it best, "Relax, but stay vigilant," and I think that sums it up pretty well.
Posted by Jessica Boyd at 12:05 PM