Bar and his big mouth 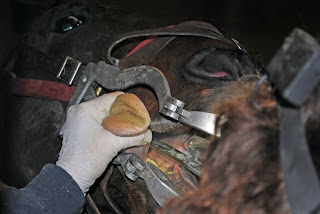 Today was Calabar's own personal dental day. He did not, however, feel special about being singled out.
If Bar's mouth were as good as Lena's, we could do both horses once a year. Alas, it is not. As it is, though, we can let Lena slide until the next time we have to do Bar, so I guess it all evens out. Well, for Lena and our checkbook it does, Bar is not so sure. Unfortunately for him, there's really no other option.
He has a wave--high in the back, sloping down to the front of his mouth with a hump in the middle along the way--all of this creating hooks that poke holes in his cheeks if left to their own devices.
We found this out the first time he had his teeth done, and it's been a battle to stay on top of it ever since. Luckily, it's a battle we are starting to win. His worst hooks develop way in the back on the bottom and are really difficult to remove, even with Leslie's best power tools. Last fall, Leslie spent a lot of time and energy trying to get Bar's mouth pathology more on the normal scale. This time, she wasn't in there nearly as long and there was a lot less blood. All good things as far as Bar was concerned. 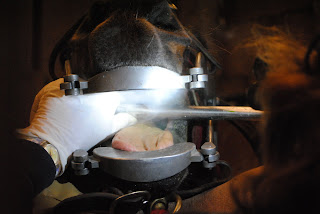 Leslie explained that some teeth have more enamel than others and are fundamentally harder than others. In opposing teeth, this can lead to uneven wear. The uneven wear then builds upon itself and creates more wave, more hooks, and more discomfort. 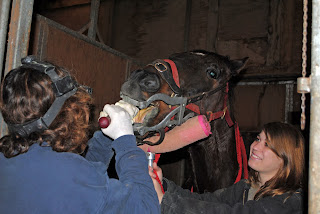 On top of that, Bar apparently has the biggest mouth Leslie has ever worked with. (I know, like owner, like horse, right?)
He was a trooper until the very end, at which point he did not relax enough to let Leslie slide his jaw laterally to check alignment. No. He clenched his jaw instead. He did let me put my hand all the way inside his cheeks--both sides--to feel the newly smoothed sides of his teeth.
And to add insult to injury, we had to pull his hay out to let the sedation wear off. Poor hungry horse. You can see how starved he was, lipping for spilled grain when Katie and Steve visited later in the day. 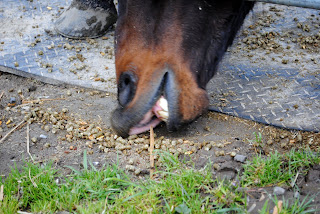 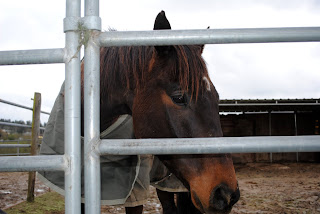 I don't think any of the horses especially like to have their teeth done. But I'm sure he's feeling much better today. It's too bad we can't talk to them and tell them how (as my mother used to say) "this is for your own good!"

Dear Bar,
I feel for you. I, too, just had a rough dental visit. Part II is coming up this week. I sweat as much as you did, and they put me in the room with the fish tank thinking it will calm me. But it never does. Going to the dentist is pure torture.
I hope you feel better soon.