A day with racehorses--past, current, and future 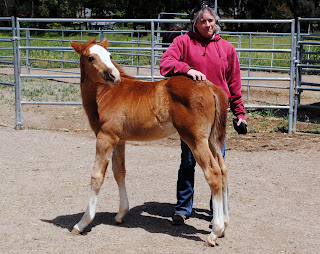 Lacey likes her butt scratched. A lot.
Steve and I got to visit with Howie and Devon today--and Sitty, Lacey, Ginger, and Ursulita, too. It made for a day full of past, current, and future runners--including more stories about Calabar.
Sitty has been off the track for a few weeks, resting and healing, and was very cooperative posing for photos. Possibly a little too cooperative. "Can you stop following me for a second?" 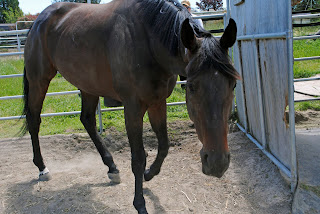 "Is that a camera?"
She looks good--relaxed and comfortable. She will probably head back to the track in the next few weeks to start training again, but for now she likes to gaze at the green fields out past her fence to see what she might be missing. 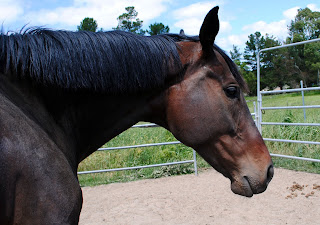 The Big Girl enjoying her time off
She also likes her ears and head rubbed, the big softie. And I do mean big. I look short next to Calabar, but Sitty makes me look like a midget! Probably good I didn't come off her--that extra few inches could have added a hair too much velocity to my fall. 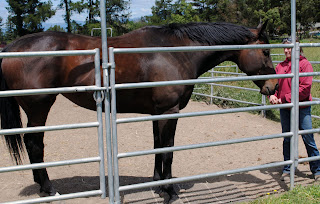 Jess the shrimp
Little Lacey is quite a character--bouncy, opinionated, and athletic. Not to mention a cute little filly with a broad white blaze and long legs. She shows definite signs of turning into quite a racehorse in a few years. 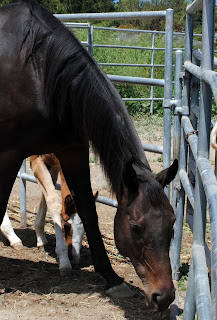 Mama and baby
In talking about the two fillies--Ginger, now a yearling, and Lacey, just two months old--I mused about what Calabar's early training was like. Howie didn't mince words, though he doesn't do that much in any case. "They beat him up," he said. Bar came to Howie as a two-year old, hot nails in all four feet, and a laissez-fair attitude as far as his health was concerned. As long as he was making money, nothing else mattered to his owner/breeder.
Thankfully, it's not the way all owners and trainers are, not by a long shot. I've met some fine trainers who won't compromise their horses just to win. Of course, that sometimes means they don't win, but it also means their horses are happy and healthy. Seems like better karma to me, but I'm biased.
As Howie talked, I got that little <snick> in my head when something starts to make sense. Calabar's early life taught him that no one cared about his health and well-being but him, and he was expected to run even when he hurt. That does not excuse his recent behavior, but it does give me insight. He is likely to try and take control when he feels insecure or when he's asked to do something past his comfort level. Or when he just doesn't like what he's being asked to do. <Click>.
I promised him tonight that I would always try to listen to him, never push him too hard when I know he's hurting, and help him heal when he is injured. The balance is he needs to work with me, even when he doesn't feel like it. Feeding time included.
Seems like steps in the right direction, anyway.
Posted by Jessica Boyd at 6:19 PM