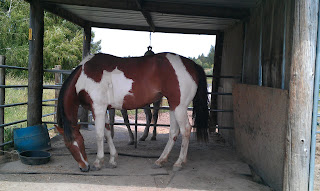 My lessons continued, with help this week from both Peter and Lena Rey Flo.
When I got to the barn, Peter asked if I was going to "ride the Paint," so I said yes. Lena hadn't been out a lot this week because Steve has been sick. She wanted out. After I cleaned her pen, she started to follow me out under her hot wire. Calabar tried it, too, so it appears they were both ready to rock and roll.
Calabar watched me lead Lena to the barn to tack her up with a curious and vaguely concerned look on his face. Yes, I know I'm anthropomorphizing, but you didn't see the intensity of the gaze as his two ladies walked off together.
As part of Peter's present quest to teach me to ride quietly and use subtle cues, we all stayed inside the round pen working on seat, arm position, and getting Lena to bend softly.
It could have been boring and Lena could have gotten annoyed with me, but it wasn't and she didn't. In fact, she seemed to relax and go with it once she figured out she didn't have to do much but trot quietly.
My flaws are what are probably typical for newer riders. While I am riding more in my seat and less in my feet than I used to, I tend to get rigid in my lower back, then round my shoulders forward, all while straightening out my elbows. Or, in my attempts to sit up, I arch my back and push my stomach forward--again, straightening out my elbows. This shot from Slide last year shows my typical pose. 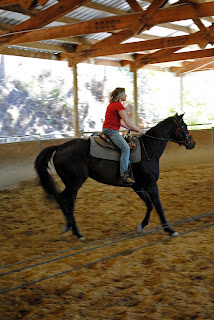 It actually hurts to sit up and arch my back, so I'm not sure how that became my other weird default, defensive riding position but it is. I'm working on it, but trying to get it to all come together at the same time is sometimes a little daunting.
My hands are about the only thing that usually manage to stay soft, but when I straighten my arms, I can no longer move with the horse and my hands bounce, and therefore so does my contact with their mouth.
Sometimes, it seems like I will never get all this straight all at once--or at least not for long.
But I'm going to keep trying, because I can already tell the difference in my seat and also in my confidence. And maybe a little bit because concentrating on my riding, my body, my position, seems to keep me distracted from worrying about what the horse might do. Crazy, but true. I will say that my main focus is really to be relaxed and soft. The rest of it will probably fall into place once I get that part figured out.
I can hope so, anyway.
After I put Lena away, I retrieved the neglected Thoroughbred and--tired and sore as I was--worked him on the ground before climbing up on him bareback (with his bridle) to practice some of what I'd just learned with Lena. He gave me a nice arc, not too much pushed out ribcage, and was somewhat mollified by the attention and carrots he received.
Both horses also got a thorough brushing--including Show Sheen in manes and tails--and Lena even got a little massage and acupressure, which lead to big horsey yawns as she released whatever toxins were lurking in her beautiful spotty self.
It did make for a bit of a long afternoon at the barn, but it was worth it. The hot tub, however, is calling.
Posted by Jessica Boyd at 9:25 PM