The life of Lena Rey and Calabar 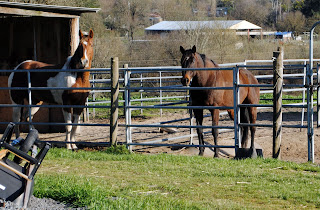 Sarah over at Mile and Miles asked an interesting question about Calabar's living situation after my Time to Think post--whether he's in a stall, pasture, if he gets turnout, etc.

Our two live full time in paddocks with shelters, so no stalls but also no turn-out to pasture. Their paddocks are good-sized, 30 foot by 60 foot or so, they are right next to each other, and manage to have enough room to buck and roll and not enough room to do any major damage. I would love (love) for there to be turn-out to pasture, but it's not an option at our current facility. The big pasture has several horses out there already, and the two smaller front pastures have two horses each.

When we first got Lena and were at a different facility, she was in a stall at night and turned out during the day. Or rather that was the way it was supposed to work. During a construction phase, she wasn't being turned out enough, which meant too much stall time, swollen legs, and a grumpy attitude. We moved to Peter's soon after Lena kicked a hole in her stall and the barn manager called her a name I won't repeat in polite company. She's been a much happier horse ever since, even without turn-out.

Bar, of course, spent much of his early life in a stall at the racetrack or a big paddock on the ranch where he retired. He has been in a stall only a few times since--once shortly after we got him and he got out, cutting up his back leg in the process, and off and on since then for various veterinary procedures. Needless to say, he is not fond of enclosed spaces. Probably I should work on that, but since I don't really blame him, I'll worry about that issue after we get through our other challenges.

We also had a couple of worries about pasture. One, we'd have to be careful putting Lena in pasture because she is very food-focused and has the propensity to turn into a very round spotty horse. Two, Bar might get silly and hurt himself. However, after our trip to Slide last year, both of those things seem manageable in the right circumstances. The initial worry we had about Lena getting all the food evaporated when Calabar did a nice job of ensuring he got his dinner. And despite a bit more hill than he was used to and a little bit of mud, Calabar did a good job of taking care of himself in a strange place.

Unfortunately, unless we put the work (time and money, too) into extending our own paddocks, it's not an option at our current facility. Why not move, you ask? Well the other reasons we board there (convenience, reasonable cost, happy horses who mostly get enough exercise, covered arena, mellow atmosphere) outweigh the desire for more room for them. Plus, Sarah's comment makes me wonder whether Bar would get even more herd-bound with Lena if we turned them out together. Not thinking that's such a good idea.

So for now, they stay where they are and we try to make sure they get out enough. They bicker through the pipe panel, and I dream of an extension behind their paddocks. It could happen. Just maybe not this year.
Posted by Jessica Boyd at 2:48 PM

It may be less than ideal, but your ponies are living a far sight better than many others. Horses that have it good rarely know it. We are fortunate to have our horses at a place that provides 50'x250' paddocks with a shelter. Room to run, buck, fart, roll, etc.

In the summer, the horses that are able to play well with others are turned out into two 5 acre pastures during the day. It's entertaining to watch the herd dynamic in action, especially when the "leader" calls for a group run around the pasture.

Dave, I am never bringing Calabar and Lena to visit! They will come home and pace off their paddocks and then pout!

Hey, I totally get it...there are SO many important factors when it comes to boarding horses you almost never get everything you want:) They are obviously happy and in my opinion are much better off than being in a stall most of the time. Super cute picture:)