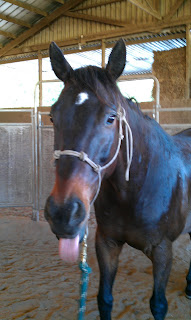 Calabar has been my big, fuzzy, brown challenge for awhile now--and you all know I adore him, sometimes in spite of himself.
The last few weeks, I've been spending time re-learning my horse--how to work with him, how to motivate him, how to teach him, and how to teach myself to guide him.
Mostly, he has been cooperative to a fault--trying to anticipate what I want and do it.
Tonight, he decided to test the boundaries a little. He ran into more than he had hit in awhile, and it was good. For both of us.
We got to what he considered the end of his work-day and I asked a little more, knowing I'd always stopped there before, knowing he thought that would be enough and it would be over.
He tossed a little tantrum or two, a couple different times, and was surprised when I just kept asking him to do the same thing that started the tantrum. Yes, please circle around me and trot over the poles. I know you don't like to go the other way, but you'll live. Oh look! You survived! Yes, you can be proud of yourself, now.
Every time he fussed and balked, I just pointed him back the same direction and asked him to make a decision--preferably the right decision.
He pouted a little, but he got over it. He learned I expect him to comply, and that I'm not going to ask him to do anything out of bounds. I learned I can push him past his comfort zone and we can move forward.
It seems we made a tiny bit of progress.
Posted by Jessica Boyd at 9:22 PM

Sounds really good - I do some of the same with Drift, and get the swishing tail but then he does the work and we can be done.

I think they all do the same thing. To me it's like dealing with a bunch of five year old children who want their snack break before they are done with their work. A little contrary but they grudgingly do it. Good work.

Sounds like more than a tiny bit of progress to me:) Great job.