The art of snarfing alfalfa

Our horses love food. All three of them. Forrest gets downright cranky while waiting for his grain since he is last in line, Lena is certain she will be forgotten or have to fight for her meal, and Bar eats the slowest of any horse I've ever met but will lick the inside of his grain tub long after it is empty. For many minutes. Somewhat obsessively, actually. Right before he wipes the grain dust leftovers off his nose and onto my shirt. 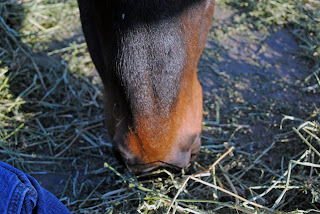 Before the price of hay skyrocketed, they were getting alfalfa every third feeding. Unfortunately, that would have more than doubled the hay budget for our barn owner (and in turn raised our board), so they are getting a 3-way that they all seem to like pretty well. Even Forrest, the pickiest hay connoisseur I know, snarfs it all all up. I know Peter shopped around for good hay and did the best he could without selling his first (and only) born child, and the horses are all holding weight and certainly getting enough to eat, so in my book he's done his job for my horses.

But as much as they like the hay, it is not (NOT) alfalfa, so we have been buying some and giving it to them as a treat.

There is an art to the enjoyment of the alfalfa.

Bar likes to toss it and snuffle through it for whatever the tastiest parts are. 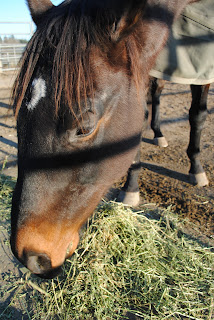 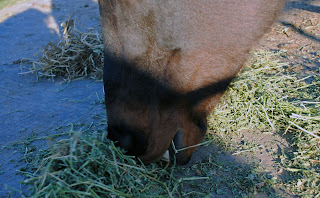 Lena likes to shove it under her gate and stretch for it. 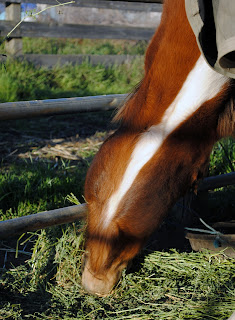 Such a beautiful long neck. 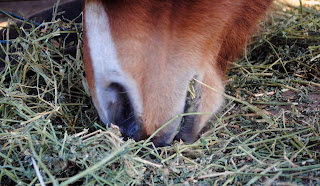 Forrest wants me to just leave him alone with it so he can savor it's tasty goodness. 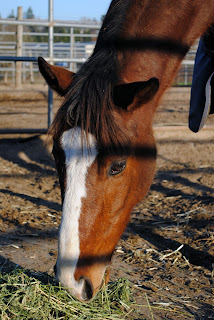 There is something completely relaxing about the sound of horses chewing. Nom, nom, nom.
Posted by Jessica Boyd at 10:32 PM

Our herd is made up of hay connoisseurs too. Dusty and Lena sound alike.Dusty eats fast and dares anyone to get near her food. Nate eats the slowest and savors his meal by licking the bucket until you take it away and Mellon is the pickiest eater. I could go on about the seven of them but I won't. Funny how they all have their own eating personalities.

I also board my horses and they get alfalfa. I supplement an extra noontime feeding on the weekends with bermuda and orchard hay pellets. Yes, the price has skyrocketed! I don't think I can afford another hike in their board! The ranch owner had to raise their board in October to cover the rising price of alfalfa.

Our alfalfa is coarse... Sugar pushes out the stalks and nibbles the leafy deliciousness and then she eats the rest... It is a treat and I use it for trailering... She'll nicker for it and as I walk to her stall her excitement is like a crack addict.