The season of serious rolling has begun 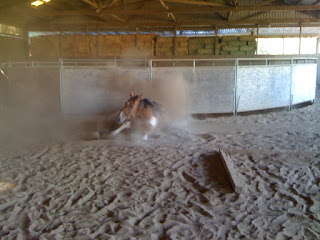 Lena earlier in the year enjoying a dust bath

Calabar, Lena, and Forrest all love a good roll, and they all have plenty of room in their paddocks to indulge in this important horse activity. Forrest particularly likes to coat himself thoroughly in his own, um, leavings. And it's all good until the rain starts and the blankets come out. 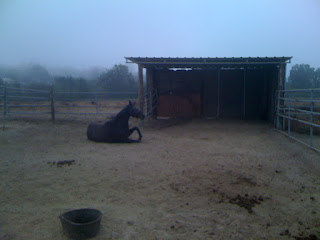 They all still lay in the mud, at least when it's not actually raining, but the rolling isn't nearly as satisfactory when their most itchy spots are wrapped in Gore-Tex. So part of my winter-time deal is to always, always allow for rollage before we start to work. I've tried, and succeeded, to ride without this ritual, but since I can totally sympathize from within my seven layers of clothes it seems like a small concession to make. 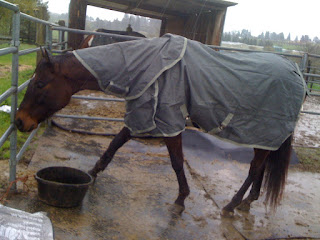 Winter gear -- good for rain protection, but not for itchy horse bodies

It was pouring rain when I got to the barn the other night. Pouring. Rain was streaming off Calabar's ears and neck as he ate and his very first desire was for me to rub the back of his ears and his head and under his chin. I think I need to renew my supply of old, gross towels at the barn again for just this sort of occasion. 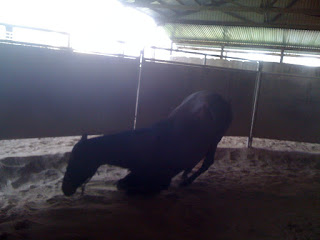 
Not thinking, I took his blanket off before heading down to the arena. And even with my apparently "I melt if water touches me" Thoroughbred dancing beside me, urging me to hurry up and get his delicate self out of the rain, he was plenty soggy when we got to the arena. Naturally, he wanted to roll as soon as he felt the soft dirt under his hooves in the arena, but I convinced him to at least wait until he was inside the round pen. His satisfaction, upon rolling at least five times on each side and coming up looking like a cocoa-dusted chocolate truffle, was palpable. I did get most of the arena dirt back on the ground and made a note to keep him blanketed on the way down next time so at least he'll only get a necks-worth of coating. Unless, of course, I insist on the stylish neck covering that he only wants when it's really bad outside. 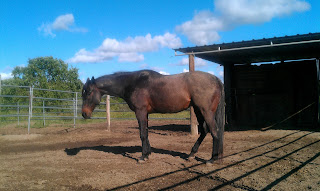 It was the driest December in California in a long time, so the rain is welcome. Mostly. As long as I make time for itchy, trapped-in-Gore-Tex-blankets horses to roll, says Calabar.
Posted by Jessica Boyd at 12:58 PM