What would I do without horses? 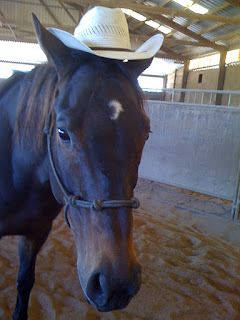 Sometimes, my mind drifts back to LBH--Life Before Horses. There were vacations to Hawaii and less broken bones. There were jeans that didn't cycle into the barn-clothes pile. There were even cowboy boots once upon a time that never saw horse poop in their whole entire lifetime. (But really, what is the point of that? Poor boots were probably confused!)

But there were also no fuzzy brown horses wearing hats--definitely a hole in my life that needed filling.

Very occasionally--usually when it is blowing frigid wind and rain, when I've just written out a check for board/to the vet/to the farrier and I can remember swimming in the balmy Hawaiian currents--I sigh a little bit.

But just a little bit. Because whenever I do venture out without the ponies, I find myself on a constant search for a horse fix. This has led to disappointment on many occasions because the average trail horse really. Just. Doesn't. Cut. It. At all. Not compared to to Calabar and Lena, a.k.a. the Wonder Twins. When we went out the other weekend, there was no plodding, not a bit of it. There was trotting--maybe a little slow-motion racing, even--as we made our way up the trails. I always hope a rented trail horse might be a little evil, but that has only happened once. (In Hawaii, oddly enough.)

On the other hand, the obsession has also led to some interesting conversations. Like the one I had outside of Las Vegas where capris and sneakers were considered reasonable riding attire (though we didn't have time) and downright practical compared to a supermodel showing up to ride in high heels. (According to the story, anyway.) And apparently, that was not the most bizarre outfit this young man had seen. (Considering we were near Vegas, I can only imagine.) Lena would never tolerate me wearing a show girl outfit, that's for sure. Way too much competition.

I think, really, it is safe to say I have an addiction at this point. When I get to the barn, even if I don't ride once I'm there, the warm smell of horse and the trail of slobber on my shirt somehow completes my day. When I don't get to the barn, I find my irritability is much closer to the surface, my joints ache more, and I'm just grumpier in general. Really, my boss should insist I go to the barn because I'm much nicer to be around, much more soothed and relaxed, when I manage it. It's like a little mini-vacation every day, only with warm snuffly noses instead of warm salt water.

Both together would actually pretty much be my idea of heaven, I just can't figure out how to get my horses on the plane.
Posted by Jessica Boyd at 10:18 PM