The last year had some high points and some low points--hitting the ground again in April being one of the latter. 2011 also dropped in some heartbreak that is only lessened by the joy of knowing two fine four-legged creatures, however briefly they appeared on the scene.

Remy popped into our lives rather unexpectedly when Katie brought him home in April. We didn't think she should have a dog and told her so, but that didn't equate to "No, you can't have a dog," so in bounced Remington. He was one of the smartest and happiest dogs I've ever known. He could entertain himself and was very trainable. I found myself becoming quite very fond of him, even when he would disturb my morning yoga practice with intense face licking. He died in July after getting into rat poison on someone else's property. It was like a light went of in the house for a little while and I still miss his funny little butt wiggle and floppy eared face. 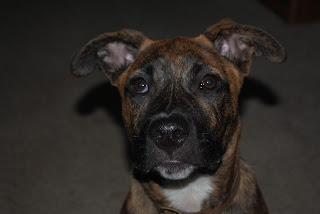 Heartbreak number two came from another four-legged and feisty creature--a lovely filly named Lacey. She was bred and owned by the people we got Calabar and Forrest from and she was a character. She was ready to race the very first day in her stall, zooming around in the straw while her weary dam tried to protect the humans from the ball of chestnut energy.

Lacey sustained a serious injury to a front leg that never did heal and ended up causing deterioration to the joint. It is the challenge faced by all who raise athletic and curious champions built on long legs, but it was a hard blow for our friends and a sad loss for those of us looking forward to watching her grow up. 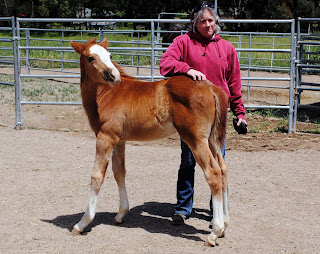 Losing both Remy and Lacey was awful, but I will never regret the imprints (paw/hoof) they left on my heart. Really loving means risking losing, so I choose to be glad these two fine creatures passed through my life on their way somewhere else.
Posted by Jessica Boyd at 12:23 PM

Such a shame about these two wonderful animals. Even though they were only with you for a short time they did leave an imprint on your memory. Hope this year has no heartbreaks.

Such a shame about both of them :(