Two cats in the house 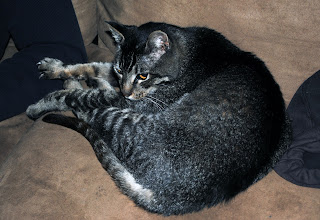 Time for a short cat-related interlude on the blog.

Oliver came into our lives in November and has, as cats do, managed to create a space for himself in our lives and our routines. And the sofa.

It took him awhile to figure out he could come in and eat every morning, then curl up on the sofa all day. He's a pro now. However, the first few times Steve went to put him out in the afternoon before heading out to the barn, it was a little traumatic. He wouldn't always show back up for dinner, but he's actually started figuring that out, too. Tuna helped. A lot.

It's like he didn't have any kind of consistency early on in his life, like sometimes things he did were okay and sometimes they weren't--all very arbitrary.

The other thing we've figured out is that he is pretty much completely deaf. He sees well, smells well, and feels vibration, but he doesn't hear much, if anything. He doesn't hear you making the treat noise, so he watches and when you go into the kitchen he makes sure if he's hungry, you know it. He doesn't hear you asking him to go out, but if he sees you make the clapping gesture, he does realize what you want. He doesn't like it, mind you, but he is starting to figure it out.

He is also learning to snuggle. It's hard for him for some reason, but Steve is gentle and persistent. Ollie sits on the Steve side of the sofa out of habit, so has had to learn to share. The head scratches have helped convince him that we are not going to eat him or toss him off the sofa. I am hoping that eventually he will make his way over to my side of the sofa, but for now I'm content to listen to him purr.

Just as I wonder what Calabar's early life was like, pre-Howie, I wonder what has happened to Ollie that has made him the way he is. He is getting over it, whatever it is, slowly but surely learning to trust us and relax.

Steve may be the best cat whisperer I've ever met. 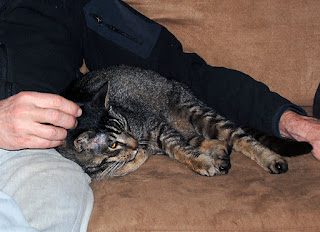 Ollie says so, too. 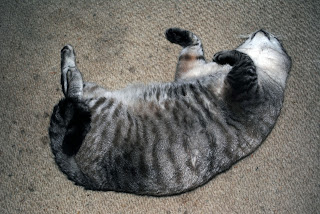 Elmer says what is so great about Oliver??!! Look how cute I am playing dead on the floor! But Elmer has also figured out that trying to steal Ollie's tuna is a very, very bad plan.

My horses remind me more of cats than of dogs. What's funny is Lena and Elmer share traits, as do Ollie and Calabar. And yet Ollie is much more Steve's cat and Elmer is much more my cat--as much as a cat or a horse can ever really be anyone's, of course.

Whatever the dynamics, it is good to have such interesting creatures in our lives.
Posted by Jessica Boyd at 8:06 PM