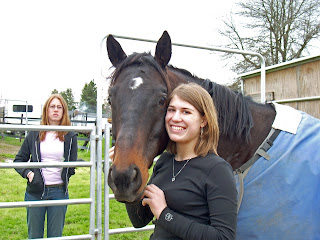 Katie (and Adrienne) got to meet Calabar today and watch him dance his way around his pen with much exuberance.

Katie likes him. "A lot." (That's a direct quote.) Though at first his energy was a little overwhelming, she got used to it and even instigated some silliness by jumping up and down in front of him and getting him to play with her.

He is a very active and physical horse, and was incredibly beautiful to watch as he kicked up his heels and acted like a horse enjoying the way his own body felt -- maybe even showing off a little for his new audience. But he never comes close to running you over or actually hitting you with a stray foot or leg, he just likes to move and he does it very well. 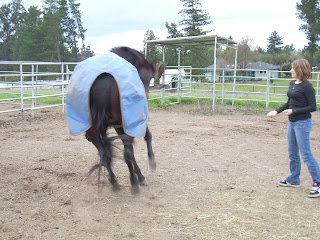 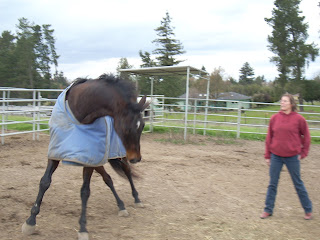 I also think he likes - or at least recognizes - having his picture taken. Not only did he pose for that shot with Katie, but check out this picture of Steve playing with him and Calabar watching me with the camera! 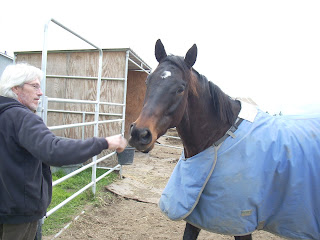 And I figure I don't have to change any of my Spottyhorse references because he has that beautiful swirly spot on his forehead. Ha!
Posted by Jessica Boyd at 8:16 PM