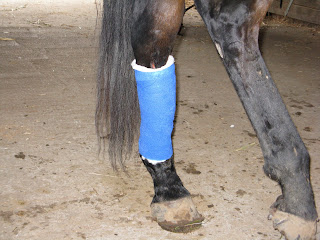 Trying to wrap the leg of a dancing horse requires patience, persistence, and preparation. I have to work on the latter - much quicker if one has all the tools laid out ahead of time.

It's been awhile since my last attempt at a leg wrap. Blue looks fetching on him, yes? The lump in the wrap isn't his leg, it's the uneven piece of cotton we used because our barn scissors desperately need replacing. The worst part of the wound is covered, though, and I'm hoping that not having it cover his fetlock will keep the dressing a little drier - at least until tomorrow when I'll have to re-wrap it anyway because I missed the very top of the wound somehow, darn it. Practice makes perfect, right?

But wrapping his leg came after his workout and the bigger dressing didn't do much to dull his enthusiasm or energy. (Though I did trim it up a little bit ahead of time to get the soggy mud-covered portions off.) All three of us - Steve, Katie and I - took (short) turns riding Bar and he made sure to test all three of us just to be sure we were each paying attention.

Lena is not entirely sure about how much attention Bar should be getting, but she was not neglected, either. She got carrots and stretching and a neck rub, then some brushing and tending while Steve cooled Bar down. She also got a good workout yesterday, so she's not building up too much energy of her own. 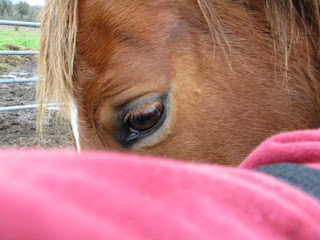 Bar enjoyed the work, even though we kept insisting that "whoa" was indeed in his vocabulary. He's a beautiful mover, with long strides and a very fluid grace. He's also a little bit like riding the edge of an explosion, but in a good way. I haven't ridden him enough to describe the differences between him and Lena, only that they don't feel the same. Complementary, perhaps, but not the same. Like an Aston Martin (Bar) versus a Corvette (Lena), maybe - one a little tiny bit more refined, though no less powerful. (More car analogies, sorry.)

We'll be working with them on different things, and I think always working with both of them on something. It's what makes them both interesting and fun. Not easy, but never dull. Can't quite see the point of a push-button horse, even if it means a little (or a lot) more risk and excitement in life.

Here is a parting nose shot of each of them. (Lena was a bit too snuggly for decent photo distances.) 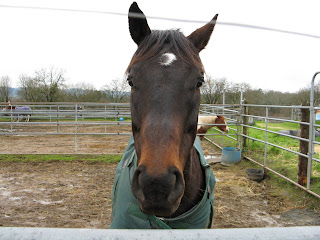 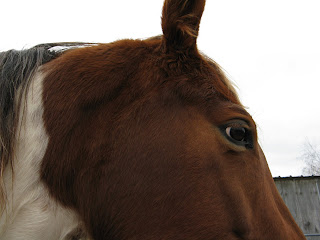 Steve says that the Corvette is much quicker than the Aston Martin, so that analogy won't work. But I think a Ferrari is too floozy and the Viper he suggested is too, well, ugly.

I'll have to do some research and come up with another analogy, I guess.