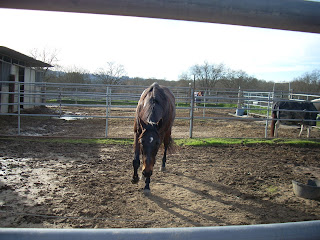 Steve had to handle both horses yesterday because I was a little under the weather, bleh. He groomed both of them, worked on the drainage in Calabar's paddock, and then lunged Bar. (Much to Lena's dismay as she thought for sure it was her turn to be out.) Steve came home a little worn out.

The two of them do seem to both like each other and realize they are part of whatever weird herd Steve and I make up with the two of them. When we pull Lena out of her pen to tend her, there is much whinneying from Bar until she either returns or we come get him.

As for Lena, this was the look on her face much of the time over the last couple of days. Funny to see such a moonie-eyed expression on 1,200 pounds. 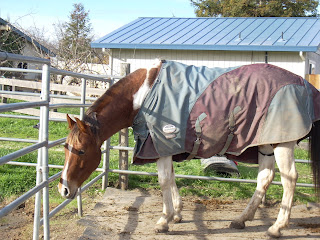 It was my turn today, so I lunged Calabar first, then rode him a little bit in the round pen while Steve took Lena Rey out in the big outdoor arena to work. Bar did okay for the most part, but reacts a lot like Lena to the round pen, particularly when he can hear way more action going on on the other side of the wall he can't see through. Voices, horses, gates opening - and Lena Rey loping past on the near side.

It's funny, I guess. I know all Lena's quirks and bad habits - at least those she's decided to share so far - so as bad as she can be, she's a known quantity. Mostly, anyway. I had to really fight myself to relax and allow myself to begin to learn Calabar, let myself begin to trust him the way I do her.

I told Steve I was trying to channel Ike a little bit, though I'm not sure how well I succeeded. It really helps that Bar is paying attention, that he does want to work and be handled, and that he doesn't want to hurt you.

Lena was a good trainer, actually. I just have to remember that I can actually ride spirited horses and trust my own abilities enough to let go and trust him. I started in a similar place with Lena Rey, so am hoping to get through this a little faster this time around.