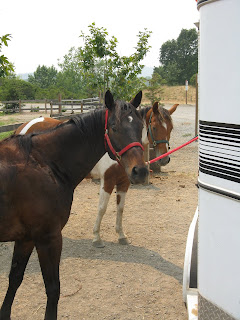 Having been away, and having ridden other horses, it's been an interesting few days back at home riding our two monsters. Something besides my riding position is different, but I'm not sure if it's just me or if I'm actually doing enough different to affect them in any way or if it's just having been away. It's not just Bar, I just notice it more with him.

Katie and I took them out on Friday, just to the Riverfront Park to do a couple loops around. Lena, for whatever reason, was in a particularly ditsy mood. She was bouncing and snorting at everything from butterflies to bushes to benches. But Bar? He was calm and cool as a cucumber, bopping along with that long-legged stroll of his, watching Lena act goofy and only occasionally acting like he wanted to spook at something, but never really following through on it.

We did a minor water crossing with them both and I didn't even have to get off Bar to do it. He also walked through instead of leaping over it, which was an improvement. We went through the water once on the first loop, and three times (back and forth) on our second loop.

The only time he got a little prance-y was right at the end, when a large-ish group of people (6-8) were walking towards us. But as soon as I put my hand on his neck and started talking to him, he flipped his ears back to listen to me and calmed down.

In fact, Bar was paying better attention to me that whole day than he ever has. It started when we loaded Lena to leave--with an audience, which normally makes all of us a little edgy. Bar was raring to go in right behind her, but held still while Katie finished getting Lena settled because I told him to. On the trail, he and I took a slight detour around a big tree just to do something a little different. He started to get a little nervous when he couldn't see Lena (even though he could hear her), craning his head back and forth to look for her. I put my hand down on his neck and talked to him, and he stopped fretting and listened to me--calming down instead of freaking out. Then came the aforementioned group of people. Finally, as Katie loaded Lena to leave, he started to get antsy, but relaxed as soon as I reached over and stroked his nose, telling him, "It's okay, you're next." We got home quietly and safely, both horses unloading nicely and ready for dinner.

Yesterday, Steve and I took them out on the road after a short arena workout and had to get past some obstacles that could have caused pandemonium--even in horses far calmer than Bar or Lena. The folks across the street had a truck and trailer plus two other cars in the road just opposite our driveway. Then there was the horse in the round pen and all the people watching it lope around a wee bit frantically because the herd was too far away and running around the pasture, also a bit frantically. All that was causing the group of horses in our big pasture to run around, buck, and whinny.

The scariest thing of all, naturally, were the white lines painted on the street down by the "bridge" we wanted them to walk across. It took three or four tries, plus some kicking and verbal coercion, but they did eventually get past whatever it was without us getting off and leading them across. Goof balls.

The horses across the street ran at the fence on our way out, and the horses in our pasture ran at us on the way back in. Both times Bar's head popped up and he started to dance and both times he responded to my hand on his neck and my voice and calmed down. I know that spot on his neck is an acupressure point, so--theoretically--it should always work that way. Only it hasn't always worked that way, so I don't know what changed. Maybe I'm calmer, though I don't always feel like it and still don't do well asking for a canter--much to my daughter's dismay and minor disgust. Maybe Bar has decided he's willing to trust me, and wouldn't that be cool! (She says with the endless hope of a horse-owner.)

Whatever the reason, I'll accept the gift of his cooperation when he chooses to give it and keep working with him so we can cooperate more often than not. Why? Because even if he's difficult, even if he's stubborn and doesn't always go along, he is still trying. Because he stops behind me when we walk, now, and doesn't try to bowl me over to get to the grass. Because he didn't take off with me when Lena came loping up behind us even though I know he wanted to. Because he'll go through water and past scary white signs on the ground because I ask him to. Because he comes to the gate every time to get his halter on, no matter what he thinks we might be doing.

I guess you could say I'm as stubborn as he is.
Posted by Jessica Boyd at 5:15 PM

Email ThisBlogThis!Share to TwitterShare to FacebookShare to Pinterest
Labels: horses, learning to ride, learning with horses