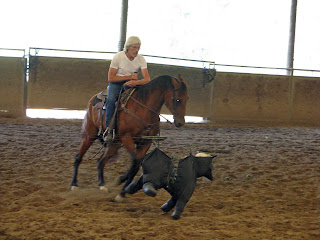 We had a great trip and learned a lot! Slide was awesome and it was so great to see Ike and Cheri again, too. We had told them we wanted some help with training techniques, so we worked with some different horses to help us do that. The last day, we even got to do a little cutting after all our hard work.

This is Steve cutting the mechanical cow on Lena's half brother, Junior. Junior moves a lot like Lena, and was acting up a lot like Bar does. That gave Steve a great opportunity to work with him on ways to counter that kind of energy and behavior.

Ike had Steve use a two-handed technique to slow Junior down, which also helped calm things down, too. Using the left hand to hold the split reins loosely, with his hand resting on the neck, Steve would neck rein and use his legs -- until Junior would speed up into a faster version of whatever gait he was supposed to be doing or dance sideways because something was "spooky" (like the cow trailer, or the barbeque, or.. you know the drill). Then, Steve would use his right hand to gather both reins up in front of his left hand and "bump" Junior's head until he slowed down, then release. It sometimes took more than one circuit of the round pen, but finally Junior was both listening and responding well, and had calmed down from fighting Steve so badly.

I learned I can get up on a strange horse and handle all the things he tried to throw at me without panicking. Alas, there are no pictures of me riding Too Much Pepper. He was one of their two stallions, but he has since been gelded and gets used now for lessons and trail rides. He gave me some bucks and a little trouble, but Ike and Cheri both encouraged me to be tough with him and he settled in for me when I did. Ike had me do a lot of side passing with Pepper which helped me focus on using my legs to move him, rather than trying to muscle him with my arms and the reins.

The things Steve and I worked on were not new to us, but I realized I had gotten into such a different head-space--particularly with Bar--that some of those techniques had been lost, or if not lost, were not being implemented in the right way. It's also interesting to get different perspectives and it was really cool to hear Ike and Cheri telling us how much better we were both riding than when we first started. I know I have a long way to go, still, but it was really helpful to get that kind of encouragement and support.

I also worked a lot on my riding position and balance. I actually found it and felt pretty good riding, as well as cutting for the first time! Yes, even Pepper and I cut the mechanical cow. He is a full brother to their World Champion mare, Snow Pepper (scroll down one horse, below Truly) and he is also very cowy. Again, no pictures - sorry!

Katie got to ride a nice little gelding named "Hal" that Cheri is doing her best to find a home for. Hal (aka Sergeant Pepperchex) needs an experienced rider, but is perfect for someone who wants to work with him. Katie would have smuggled him home if she could, but he wouldn't fit in the back of the truck and thankfully we didn't bring the trailer. I didn't get any pictures of Katie and Hal, either. I know. I'm fired.

Adrienne got to ride her good buddy Eclipse the first day, then moved onto Dandy for day two. She loped by me at one point and said, "I forgot how much I liked to do this!" Here are she and Dandy cutting, which took some convincing. Dandy is a great trail horse and makes really cute babies, but she wasn't sure about this whole cow thing. Obviously, she and Andi made it work, though. 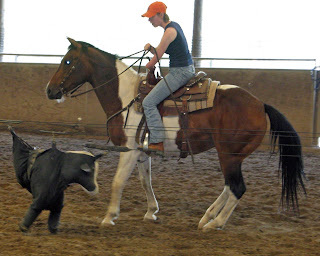 It was really a great trip and helped me remember why on earth I decided to follow my daughter down this horse road in the first place. Katie is a big part of it, and watching her ride Hal around with that big grin on her face was priceless. But having Ike and Cheri understand the horses we like to ride, why we like to ride them, and then come up with ways to help us ride them better was much more than just icing on the cake.
Posted by Jessica Boyd at 11:02 AM