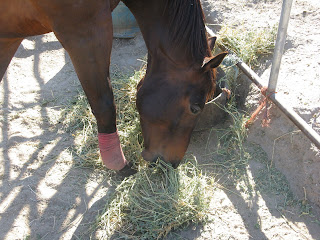 Bar is coming along very nicely. I rode him last night for about 20 minutes, just at a walk, and he was moving pretty well. He did get a little hesitant around the end of the arena where he fell, though. We've since removed the bandages to air things out and it all looks good. No worries, it wasn't wrapped very tight, mainly to hold the gauze on and the dirt out.

Tonight, I got there before Steve and rode Lena because she hadn't been out since Sunday, the poor girl. Steve got there and didn't think he felt like riding, but ended up changing his mind and brought Bar down to the arena.

Lena and I stepped back and watched while Bar and Steve did a nice canter, switching leads at one point almost effortlessly. Such a beautiful horse to watch.

Steve said he felt Bar tire a little sooner than normal, so slowed him down and walked it out while Lena and I argued about continuing our workout. And there was definitely some arguing.

She and I stayed in the arena loping fast circles until she decided that listening to me was a better option than running off with me. Bar and Steve leaving was bad enough, but then Cindy started graining and things got a little hairy for a moment. But we got through it and she got a good workout -- not too bad for a day's work.

And it was great to see Bar moving pretty comfortably and carefully in the arena.

Owning horses, working with horses, is always a new experience. It's what makes it fun and interesting, after all.
Posted by Jessica Boyd at 9:45 PM