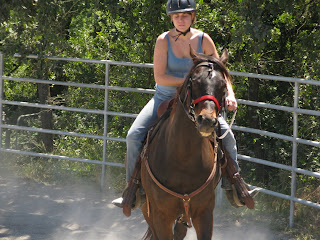 We had an interesting day in our little horse world today, a little drama along with the normal joys of training difficult horses.

It was a nice sunny and quiet afternoon at the barn and we started out with Katie on Bar and Steve on Lena so I could take some pictures and video. Here are Katie and Bar (and Lena, Steve, Melody and Cruzer, too.)

Bar seemed to be a little lazy today, maybe because of the warmth, and didn't really want to canter much. As many of you know, that's a hair outside the norm for him, and may have led to the last bit of excitement we had.

Steve and I switched off so I could ride Lena, so we adjusted the stirrups and off I went. I felt pretty good, like I was balanced and riding well - yay! Then Katie traded off with Steve so Steve could ride Bar and that's when things got interesting.

I was loping Lena and came back around facing the far side of the arena just in time to see Bar and Steve go down to the ground in a cloud of dust, Steve underneath as Bar rolled to one side. Bar stood up with Steve's foot still in the stirrup and I held my breath in the split second that it took for Steve to pull his foot out of the stirrup. But Bar just stood there, which was a huge relief--until I saw him holding his "bad" leg up in the air and leaning on Steve. They started walking towards Lena and me, Bar limping badly, barely putting his weight on the leg. I really never thought much about the phrase "my heart sank" until I felt mine hit the pit of my stomach.

I was off Lena by then, walking towards them, worried about how to make sure they were both okay, wondering how we were going to get Bar out of the arena if he really couldn't put weight on that leg. I hollered (yes, I was maybe a little panicked) for Katie, who came across the arena and led Lena out by one rein while I unclipped the other to use as a lead rope for Bar. Steve took off Bar's saddle and bridle and I led Bar to the wash rack to clean off and cool down the leg so I could see what we were really dealing with.

Much to my relief, both Bar and Steve started to move more comfortably as we crossed the arena. I got Bar to the wash rack and he even held his leg up for me to rinse. He got a full rinse while I was at it, actually, and started putting more weight on the leg at that point. He'd clipped the back of his right front - the bowed tendon - so it was bleeding, but wasn't super deep. He'd also skinned up both of his knees when he went down, but again, nothing was too deep.

Back to the being lazy part. Steve said Bar just wasn't quite paying attention--arguing and tossing his head instead of watching his feet when asked to canter--and he tripped. We were very lucky it was in the arena where the footing had some give and Steve's leg - trapped under Bar - had a place to go.

We cleaned and wrapped Bar's leg and he was putting what seemed to be normal weight and pressure on it, so I think he'll be fine. Steve is stiff, and thinks he'll be stiffer, but he also seems like he'll be alright. He is currently refusing ice and any hovering attention I might offer.

And if it seems like perhaps I was more preoccupied with Bar than Steve.. well, yes, I confess that was the case. I am only now feeling guilty about it, now that both of them seem like they will recover without any serious damage.

All of this happened while my mother and Cali (the dog) were watching from the other end of the arena. Mom--not being a horse person--did the wise thing and stayed out of the way tending Cali while the rest of us tended horses.
Posted by Jessica Boyd at 5:30 PM

Oh moly! I almost had that happen with Ink and I. He's done the same thing.

But on a good note that video was nice. I liked the first time when Bar went around and looked at you! He was probably wondering what his mom was doing with that thing in her hands watching him :D.

Lena is beautiful. But where is her video??? ;)

It was pretty scary! Really glad it wasn't out on the trail going downhill!!

I don't know what Bar was looking at, but you're probably right. :) "What are you doing up
there, Mom?"

Thanks, we think Lena is very beautiful, too! Unfortunately, Steve isn't quite as fond of having his picture taken as my daughter is. I'll put one up soon, though! :-D