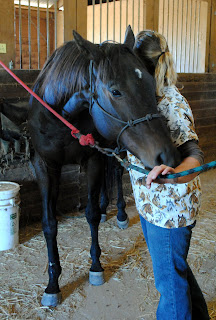 Bar's favorite masseuse (okay, his only real masseuse since my left arm is still not 100%) came out yesterday to watch the boy move and give him some body work.

First, we went down to the round pen, though there was some hesitation because my horse has become a little suspicious of different routines of late. Shocking.

Karen was very impressed with his trot and canter work both ways and agrees he's not showing any sign of favoring any part of his body. He's much more balanced and relaxed, moving with much more flow and strength than before. His musculature is getting more even--his left shoulder (over the knee he banged up) is closer in size and strength to the right shoulder (over the bowed tendon)--and his topline has improved. Karen also noticed he's gained a little more weight, even just in the last two weeks since she was out working on another horse. That's good, because it will give him more to use to build muscle. Just a little extra food and having his teeth done--no supplements--seems to have done the trick so far. 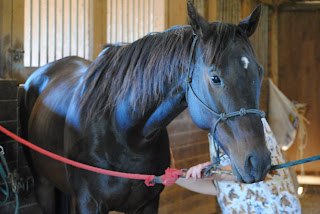 Since I see him every day, I don't always notice the subtle changes, so it was good to hear we're on the right path. Even if he is still harboring vast conspiracy theories about me. 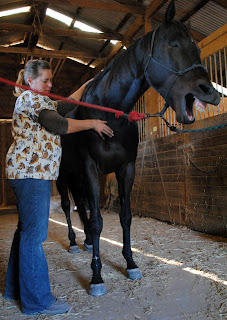 He did his best job yet relaxing during his massage, and released a lot of big yawns and head shakes. Another interesting first were the sweat patches that appeared on his left side. Karen will usually get some on his back and his withers--the latter being a spot in which he carries a lot of "junk" as she puts it--but never this dramatic. He had a huge patch on his left shoulder, another one low on his flank, and a strip on his hip. 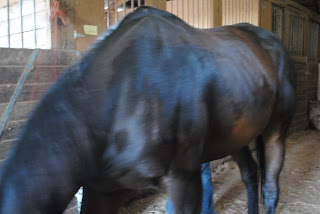 Here's a view from the side of all three, though dark horse and indoor lighting necessitate some artistic (well, sort of) assistance to see the patches. 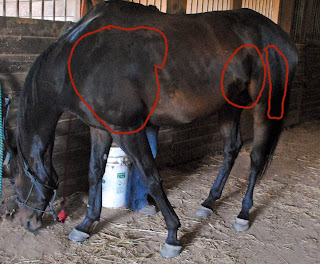 The sweat was a good sign that he was able to release a lot of toxins, stress, whatever-all-else was floating around in there. We might have gotten more on the other side, but by the time Karen got to those parts, feeding time had commenced and she was competing with the sounds of chewing and the grain cart. Very distracting apparently.

He lasted through the massage, though, and was thrilled to find alfalfa and grain in his pen when we were through.

Now onto the mental hurdles, buddy. We both have a few to overcome, but I have tremendous faith we can do it together. Especially now that we're on the downhill side of healing!! Or uphill? Whatever. Physically, we're both in a much better place, though the work we've done while healing has been invaluable, too.

It will be interesting to see what happens next, that's for sure.
Posted by Jessica Boyd at 4:06 PM

He does look pretty happy about the whole thing! Having the physical stuff in better shape will make the mental stuff easier.