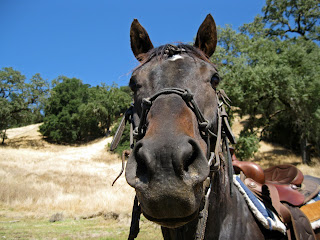 Something occurred to me as Bar and I cantered around the indoor arena last night, nice and easy, both of us calm and relaxed. (Yes, I did just say "cantered" and "arena" in the same sentence.)

The trust is coming back.

The trail riding has been a key factor. He is so awesome and steady on the trail, it's beginning to translate to my brain when we're in the arena. Probably to his brain, too. He listens. He responds. He takes care of me. I listen. I respond. I take care of him.

That two way street has been nearly three years in the making. From being dumped in the sand and watching him run off through a campground to cartoon-style spontaneous "dismounts" and bucking fits to following my gut when it came to riding and training him, it's been an amazing journey. We've overcome a lot, the two of us. And we've learned a lot.

There will always be more to do, more to experience, but being able to read each other and communicate with a touch or a word--all based on trust--means we do it on a foundation we've built together.

Sometimes it won't work. Sometimes trailers revert to being terrifying limousines of doom and we get to play horse psychologist.

But it works a lot more often now than it used to.
Posted by Jessica Boyd at 4:45 PM

Going down the road, step by step and day by day - that's what it's all about! Dawn and I are taking some of those steps together - for her the arena is less of an issue and the trail more, but we may get there yet.