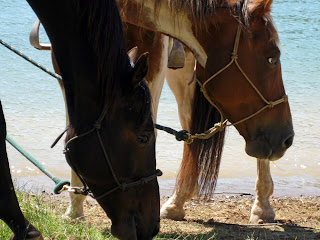 We noticed blooms on our Christmas Cactus today, about two months earlier than last year. Since last winter was the longest in recent memory, we're understandably concerned that cold, rainy weather might be upon us sooner rather than later.

Might as well make hay--or tracks--while the sun is still shining, so we loaded up and headed out to Lake Sonoma to check out the trails Katie has been riding all summer.

I'd like to say the loading was a piece of cake, but it was not. Bar is still harboring childhood angst about it all, but once Lena's in behind him all goes well. We figure it will just take a few more times of the same routine before he figures things out and settles down. (She says hopefully.)

All in all, though, it's just good to be healed and back out on the trails. It's been quite a long year for both Steve and me, recovering from and being sidelined by our various injuries.

Bar, too for that matter--our rehab work has really helped and he was rock solid on the trail. He has really figured out the downhill thing and did better by far than he ever has at taking small steps and using his hind end.

Neither of them were sure about the water at the bottom, but both did finally stick a nose in and get a drink. Not salty was a nice switch, apparently, though swimming is still out of the question.

The trail was challenging--lots of up and down--but they both did really well and felt strong and steady the whole time. 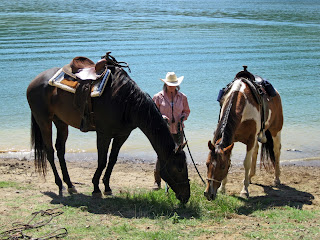 The question is how many more rides before the rain starts. The answer? As many as possible.
Posted by Jessica Boyd at 7:57 PM

Since late last month, the weather up here has turned prematurely sour. I think we are in for a miserable winter (at least by our standards).

Each year I tell myself that this will be the year that I will keep trail riding through the winter. But it's difficult, at best, to get motivated to ride when it's wet and cold. I'm sure the horse would be less than excited about the prospect, either.