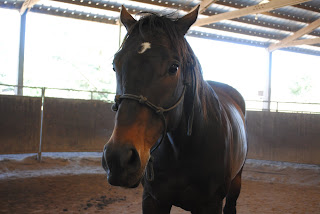 Armed with an overflowing brain after yesterday's clinic, I saddled up the boy wonder and headed down to the arena to work on some of the things we learned--starting with leading and ending with being soft with my hands in his mouth. Not literally, of course, but riding with much more contact than I've been using up to this point. Okay, more contact unless I'm asking him to stop or slow down.

Poor Bar. He really thought he had things figured out, and he did--based on our previous arrangement. But big kudos to him, he never once got pushy or aggressive. He just looked at me and tried really hard to figure out what I was asking and why I had changed the equation on him. I just kept calm, encouraged him, and tried to stay consistent.

Of course, changing the equation is not very consistent, so I'm not sure how much I'll push the arms-length boundary with him. He is very respectful of my space, he just likes to be close to me. However, he backs off when I ask, will move out of my space, and will stand quietly next to me. We'll play with that a little and see how it goes, and explore the concepts of softness and contact in the meantime.

Riding with contact was a whole new thing for both of us and it may take awhile to get the hang of it. I learned (and remember, this horse thing is relatively recent in my time-line) that riding with a loose rein is the goal. Lena knows enough to be collected on a loose rein; Bar does not. Bar learned to pick up the bit and haul butt down the track. To his credit, he has learned since then that contact means I'd like him to slow down or stop, so it was hard for him to figure out what I wanted from him when I asked him to move forward into my hands.

This is new, he said, ears flipped back at me as if to question my sanity.

Backing up for more than a few steps--softly--was also new, and we didn't get soft immediately. In fact, I think we only got a level of softness as compared to the HUGE arch in his neck as he tried to figure out what on earth I was asking for. "You want my nose on my chest? Is that it?"

I'm of course completely unsure I'm asking correctly--I actually think I need to ask a bit more gently--and, following that, recognize the try when he gives it. But we're both doing the best we can and figuring this out together.

Honestly, a year ago I'm pretty sure he'd have dumped me on the ground. But tonight, he just kept trying for me, kept thinking, and finally gave me a lovely walk, with contact and softness. It wasn't as fast as his normal walk because he couldn't figure out why I was holding his mouth and asking him to go forward--not normal Jessica behavior, he says--but he finally relaxed, stopped mouthing the bit, and moved forward with a nice, soft headset.

We're still working on the backing, and we didn't quite manage the sitting trot. I tried. I bounced. He tolerated me bouncing much longer than is really reasonable.

I told him he did a fabulous job with a bunch of new parameters and called it a night.

I also hear Lena got some work on being led and not leading. Steve said it only took a couple tries to get her to where she wouldn't go that next step forward. Smart girl, that spotty mare.

The journey is about to get really interesting, I can tell.
Posted by Jessica Boyd at 8:36 PM

Good stuff! That slowing down at the walk when learning how to soften is pretty typical - he'll get the hang of things pretty quickly. He sounds like he's willing to trust you when you ask him something new, instead of worrying about it, and just try to figure it out - that alone will take you a long way.

Collection has always been a bit of a struggle for Smokey and I. He knows how to collect, but won't do it naturally. I know how to collect him, but get tired of holding him up to do. The result? A lot of uncollected riding.

I've probably said this before, but in my distant observation, Bar trusts you, and, as a result, the two of you will continue to progress nicely.