Life is short, sometimes too short 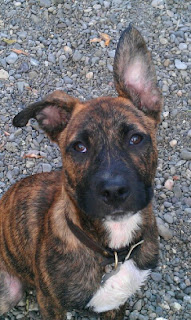 This morning was a long time ago, our house is quieter and emptier than it was just yesterday, and there is suddenly a smallish-sized, dog-shaped hole in our family.

Remy the wonder-dog--Katie's 4-month old mutt--was a happy, bouncy pup just yesterday morning. He tore around the house, chased a ball up and down the stairs, tormented the cats, nosed around the backyard, ate, drank, did his duties outside and never once hinted at the malaise inside him.

By the time he showed symptoms last evening, the vet told us it was likely already too late to have done any good. This morning, despite the valiant efforts of the team of vets and techs at Pet Care in Santa Rosa, Remy went to that place all good dogs go when their time with us is done.

I wish we had more say in that because two months was not nearly enough time with the pup who managed to weasel his way into my "no dogs allowed" heart.

He somehow got into poison--probably rat poison--though it seems unlikely it was around here since all our neighbors have dogs and/or cats. The vet said it could even have been up to two weeks ago, so there is really no way to know where it came from for sure. He bled out into his chest and abdomen, possibly even into his brain and spinal chord, causing fluid build-up around his heart. His heart stopped twice and he was revived twice, but the third time they couldn't get him back.

I keep thinking I hear the tag on his collar, and sometimes I do because Katie is carrying it around. Katie's boyfriend's dog not only spent a half hour looking for Remy, when he found the new pile of dirt in the backyard, he started to dig there. Thankfully, we had placed lots of rocks on top to prevent Dax (or other, wilder creatures) from doing just that.

My heart hurts, more than I thought it would, and not just for Katie. I miss that floppy-eared little dog and his fine spirit, good manners and funny little voice.

For as short a time as he bounced through our lives, Remington has left a mighty large hole in this family.

Rest in Peace, my little Booza-Dog. I miss you.
Posted by Jessica Boyd at 12:32 PM

Email ThisBlogThis!Share to TwitterShare to FacebookShare to Pinterest
Labels: death and dying, losing a pet, Remy

So sorry to hear about your little guy. Poor Remy, even though he was only with you for a short time it's easy to see what an impact he had on your family. What a special little fellow. My wishes for your family to heal and just remember how much joy he brought to you all.

That is so tragic and sad. I am so sorry for your loss *hugs*

Soooo sorry! It breaks my heart to hear of such a loss... sending virtual hugs to you all!

I'm so sorry to hear about your family's loss. All my best to Katie, I can't imagine losing a puppy. For such little balls of fur, they sure do run off with a big chunk of your heart.

My heart hurts for you - so much. He is just precious, I love, love, love the picture you put up. He's so cute!
At times like these, I always think to myself - "Yes- it hurts, but then it should, right? Remy deserves to be missed, ya know? Bless him.
Thinking of you ~
Big ((hug))

Oh - I'm so sorry to hear this sad news. Remy was adorable and I know he will be missed - bless his little heart :(