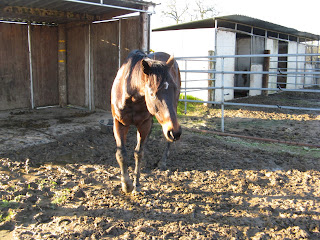 We gave Bar a new challenge today and he did pretty well!

The barn was busy when we got there, as it should be on a gorgeous sunny day, and I admit I was pretty apprehensive to take Bar down into the arena with all those people and horses. I could imagine all kinds of scenarios in my nervous little head, none of them ending up nearly as well as it actually did.

The first thing he and I did was go down and just stand and talk to Janice (and Tye) and Linda (and Lad). Bar stood next to me very calmly, taking everything in, interested in meeting the other horses, but accepting it when I didn't let him.

Then I got on and we walked awhile, checking out the arena, the bike path, what the other horses were up to - including Steve and Lena Rey, who had come into the arena. Bar did try to stay with Lena when she was going the other direction, but he listened to me and cooperated when I wouldn't let him. We did a lot of trotting and walking, just working on paying attention to each other and not too much on what was going on with other folks.

He did really well, much to my joy and - yes - amazement. He did want to run more, but Peter had a lesson going on and with all the other folks in the arena, I decided a few slow circles each direction at the far end of the arena was all I was comfortable with and with only minor objections, he went along with it. I promised we would run more tomorrow, when we had a little more breathing room.

Then Lena, Steve, Bar, and I wandered down the driveway and for the first time, Bar wanted to keep going down the road. We didn't let them this time, but I think next time we will.

It even seemed like he knew he did a good job and that I was happy with him. He just acted calmer and less worried than he ever has before.

I know this is no guarantee for tomorrow, but I take every positive step as a gift. He's trying so hard and he surprises me sometimes, allowing the trust to build a little more between us, allowing the learning to progress a little more each ride for both of us.
Posted by Jessica Boyd at 3:51 PM

It seemed like you were having fun on Sunday! I thought Bar seemed very relaxed with all those horses and all that commotion going on. Glad to see you all enjoying the sunny day!