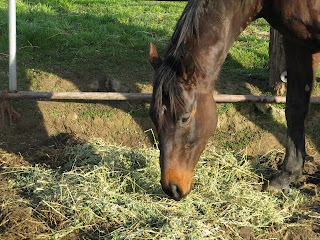 I've found a few articles and books with information about retraining ex-racehorses. It's pretty interesting to read things that help me see how "normal" our experiences with Bar actually are, and that also frame some of the advice we've gotten along the way. As in, "Oh, now I see why that makes sense."

I found this article from a place called Tranquility Farms. They specialize in retraining Off-Track Thoroughbreds and placing them in new homes.

Amazingly enough, some of the things Steve and I are doing are recommended when dealing with horses like Bar. Some by accident and some because we do actually listen to the advice we get here and there.

We've been working over obstacles, which started as preparation for trail work, but is recommended as good for trust-building and also a way to "untrack" a racehorse and get them to pay attention to their feet. You know, those things at the end of the long things you stand on, Bar.

Doing the slow work I just started is also really great for him. I remember Peter telling us this with Lena, that going slow was really important before speeding things up. Okay, I get it now. Bar really responds well because I'm taking the time to work with him at a walk, get my hands and body in a good place, be relaxed (well, mostly) and it all goes back to building that trust and confidence while getting a horse to think and pay attention to you. As Steve says, Bar knows how to run. We need him to be thinking, engaged, and confident that we know what the heck we're doing and he knows what we're asking him to do.

Some of the things we've tried that haven't worked are also now a little more understandable. Like taking him out somewhere totally new and having things go awry when we hadn't established that trust and confidence, yet.

A couple of the things I've read talk about grooming, too, and how sensitive Thoroughbreds can be to touch. I had noticed that with Bar, but hadn't particularly changed tools or tactics, just worked on talking to him and keeping a hand on him while I groomed which did seem to help - most days, anyway. He's also starting to respond really well to light massage and acupressure. I even got a big yawn out of him the other day! Very exciting!

The key is patience and time. We've only had him two months, which is not a long time to get to know a horse and his quirks and habits, or for him to figure out we aren't going to do anything too evil. (Wormer doesn't count, Bar.)

The more I work with him, the more I appreciate his intelligence, his curiosity, and his attitude. He isn't perfect, but he is trying really hard and we're making progress. I'm sure he says the same thing about me, actually.

He will teach me a lot in spite of myself, I think.
Posted by Jessica Boyd at 7:10 PM

Hi -
I've only just found you, but I absolutely agree with everything you say ! I have four ex-racers, all at different stages of their re-hab, and with every one it's the same; progress only comes slowly, with a lot of time and patience, and many setbacks. But when it does come, and your boy suddenly says ' Ah ! So that's what you mean! And - , well, it's not so bad. In fact - Yeh! I can do this !' - then life is really great !
Good luck in your journey with Bar - I'll follow your progress in your blog.
All the best
Annerleigh