Wildlife at the barn

This morning, while tending the terrible twosome, I noticed some vultures in the big back pasture. Actually, Lena noticed them first. Then I saw two other shapes out there - a pair of coyotes!

I actually filmed them for a bit, but my video is a little shaky and needs some editing. As I was filming, though, I noticed that one of the coyotes was moving on three legs instead of all four.

So, meet Tripod the Coyote. 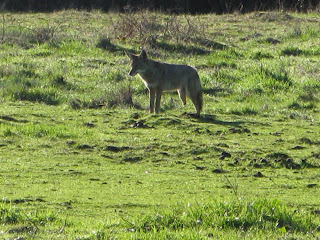 Looks a lot like a leg that got caught in a trap, poor guy.

I know a lot of folks think they are pests, but I'm still excited that I got to see them this morning doing their coyote thing.

The horses weren't bothered at all, so they must be used to them.
Posted by Jessica Boyd at 10:43 AM