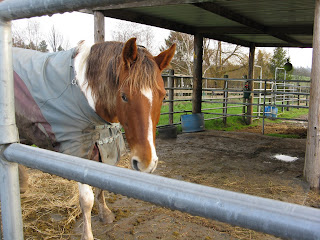 One of Steve's major concerns about getting a second horse was making sure both would get enough attention. Part of what makes Lena such a good horse is how much we worked with her, all of us, and he was - rightfully so - undecided as to whether we had that much more bandwidth. Bar does need our attention, energy and training - maybe even more than Lena sometimes - but I think it's been good for all of us, if not remotely easy.

Lena is not sure we have enough bandwidth. I get the look in the picture above whenever I'm in Bar's pen, though I suspect it's more fear of uneven treat dispersal than feeling any lack of attention from me.

Don't get me wrong, she isn't getting all 45 minutes of my time and attention every morning, so it is less than she was used to. And I do find myself counting out carrots and balancing time spent in each paddock because they both watch when you're in the other's paddock.

They both demand a certain level of energy and focus, and Lena was used to having all of it from three people. Bar probably isn't used to quite this much attention all the time, but he's responding and I think it's helping as we work through getting to know each other.

Of course, as we all settle in to the two-horse routine, there is plenty of room for each to feel left out. When Steve took Lena out yesterday, he got the evil eye from Bar. When I took Bar out last night, I got pawed at by Lena.

When we can work them together, it's a good thing for both of them. Having Lena in the arena helps center Bar a little bit faster. Bar makes a good training aid for Lena when he starts in on some antic or another and we make her focus on us instead of him. Trying to keep Bar in the arena when Lena leaves is a little challenging, but also good for him.

We're all learning a lot and as challenging as it's been so far, I really enjoy working with him - maybe even because it's so challenging. He still tests me every time I get on, seeing if maybe this time I'll give in and let him do what he wants instead of making him do what I want, but I don't dare do that. It's making me think, try new things to see what will work with him, what will get his attention and hold his interest long enough for the lesson to settle in and to forge just a little more cooperation and trust between us.

It's making me a better rider, too. I have to sit deeper and stay more balanced so I can cue him correctly and concentrate on what I'm asking him to do without worrying about my body. Well, and so I don't fall off when - for example - he dances sideways in response to another horse running and bucking in his paddock for no reason a silly human could grasp. Last night, I sat right through the spook and circled Bar back around where we could stand and watch the horse in question. When I called the other horse by name, he looked right at us, earning me a backwards ear flick from Bar acknowledging who-knows-what.

Once he gives in, he pays attention and tries really hard to do what I ask him to do. The testing period appears to be getting shorter every time I ride him, too, though that's no guarantee for Steve or Katie - he's likely to try something interesting to see if they are paying attention next time they ride. I do miss riding Lena as much as I used to, but I'm sure she's saving a few lessons for me, just in case I get too complacent.
Posted by Jessica Boyd at 4:56 PM