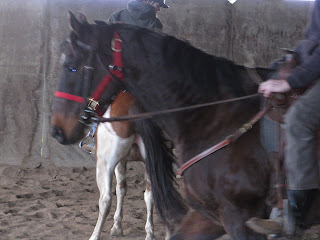 I had a great ride on Bar Wednesday night. No, he wasn't perfect but for the first time, he was really listening to me and (mostly, anyway) ignoring outside input. He can't ever ignore it totally, it's not his nature, but I was getting 98% of his attention and cooperation, so felt pretty good about the work we did.

Then Steve rode him yesterday and had a slightly different experience. I wasn't there, but it sounds like things started out normally - so a little testing, but not too bad. They did some walking and nice trotting and eased up into a canter. Steve got him to go both directions nicely, though they were arguing a lot about stopping.

One of the arguments culminated in Bar bucking hard enough to lift Steve out of the saddle and his stirrups. Much to Bar's surprise, however, Steve remained on his back and then Bar found out he was in big trouble.

They did quite a bit more work after that, and they did it mostly Steve's way.

I showed up later and rode the "easy" horse, who was easier than Bar had been, but not necessarily perfectly behaved by any means. She and I got a good workout, though, and partly because of the things we're learning with Bar, she didn't get away with some of the things she used to. Just don't tell her where we learned it - I can just see them conspiring together.

They are both so funny - Lena was bent out of shape when Steve took Bar out and even though he'd already been out, Bar really expected that I was there to ride him so was surprised when I went past his gate and got Lena. At one point, Bar noticed us down in the arena and he watched us from his pen until we finished up and did our walk down the driveway. He probably would have watched longer, but he couldn't see us at that point.

After our ride, Lena got a rubdown, a little massage, some wormer, her blanket and some carrots. Lucky horse - well, except for the wormer. Then it was Bar's turn. He stood really nicely for me while I tended him, very relaxed and calm. He is funny about being touched sometimes, and isn't sure about the benefits of massage, yet. I was scratching mud off his shoulder and moved into a flat hand, light massage because the shoulder felt like it needed it. He started to reach around to nose me away, but it must have felt good because he just stopped and let me work on it for a little while. Lena was also not sure about massage in the beginning, but will now stand still longer than I once thought possible while I work her sore areas and pressure points. Bar isn't quite to the jaw-cracking yawn stage, but is getting more and more relaxed each time.

On one hand, I'm learning things with Bar that help with some of Lena's less-than-good habits. On the other hand, I'm recalling things from training and working with Lena that help me have a little more patience with Bar. We are also constantly looking for new techniques with both of them, ways to keep them engaged and paying attention long enough to teach them something and long enough to learn something ourselves. Challenging, but not impossible.
Posted by Jessica Boyd at 9:33 AM