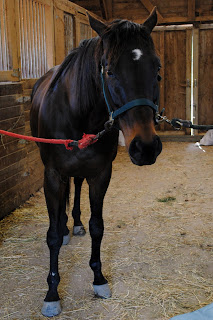 Bar has moved pretty well on his puffy knee nearly the whole time, but this last week he's made it clear that he feels fine, thank you, and would like to go back to work. So much so that the other night, he took himself for a little gallop in the indoor arena. (Sorry, Leslie.) He was acting very calm and mellow, allowing me to throw a jacket over his head repeatedly without even a single head toss, following me around like a puppy.

He was merely lulling me into a false sense of mushy-headed owner-ness.

He went from calmly snuffling dirt to see if it was soft enough for rolling to a full-on gallop. Well, maybe not quite full-on, but close enough. If I were to anthropomorphize a little, he was testing the leg. He did some lovely figure-eights, switched leads again and again, stopped hard in the corners--always favoring the wrapped leg--and of course did some obligatory bucking and farting.

Part of me groaned, knowing he wasn't supposed to be stressing the leg like that; part of me grumbled at my own stupidity; part of me sat back and reveled at his speed, power, and grace. Damn that horse can move.

It didn't last long, thankfully. Soon after it began, he turned and trotted up to me, looking exceedingly happy and proud of himself.

I figured the only thing to do at that point was check the knee then for any strain, and again the next day. I was afraid it would balloon up again and the wrap that was on it would cut off circulation.

The good news is there hasn't been any additional swelling, bones are starting to emerge from the puffiness, and he continues to move well on it. The not-so-good news (especially for him) is that there is still a little swelling so there was more wrapping today. 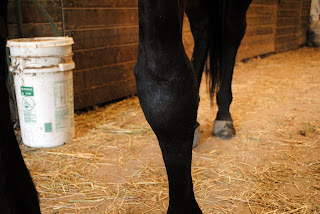 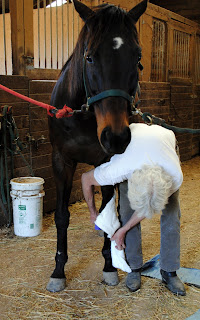 When Bar and Lena heard the truck and trailer today, they both got very excited. When Katie left with Sammy, they were both very disappointed.

I know how they feel.
Posted by Jessica Boyd at 7:17 PM

Glad to see Bar on the mend. I think they are better caretakers of themselves when injured than we tend to believe. And I'm sure it felt good to run around like a mad man.

Pretty sneaky, though, convincing you he was going to roll, then taking off.