Horse shoes come in all styles and shapes and what you do with your horse, as well as confirmation considerations, generally dictates what shoes you use. Not knowing enough myself to determine what the horses needed, I've relied on our various farriers to do what they thought best. 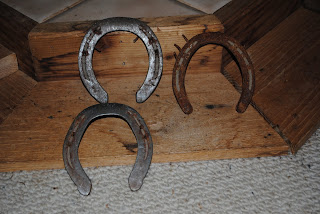 Bar and Lena have both had plates--fairly slick bottomed shoes--the whole time we've owned them. I suspect that Lena, being a cutting horse, was shod that way to give her a little slide for cow work. (The photo above is actually three of her original set of shoes. Yes, I saved them.) Bar, of course, had racing plates (aluminum) while he was competing. They are more convex on the bottom to give a horse more grab on the track. 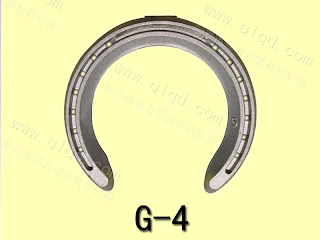 Had we had any lameness issues or confirmation (how a horse is built) corrections to make, that would probably have changed things, but we didn't so I did not obsess about their shoes. Other things, yes, but not that. Aside from keeping them on Bar's feet, I didn't give much thought to what was going on the end of their legs as long as everything seemed to be working.

Then, when Bar was so sore a couple weeks ago, our friend Karen--part-time farrier, and excellent horse masseuse--checked on Bar to be sure he wasn't seriously injured. He wasn't, of course, but she had some suggestions--including switching to a traction shoe for both horses. (A shoe more like the racing shoe in construction.) Her reasoning was based on the riding and work we do, and she thought that the traction shoe would give Bar in particular more confidence in his footing--helping him both mentally and physically.

Karen has been working on horses for over 15 year--including on-and-off-the-track racehorses--and has an exceptional eye for seeing how a horse moves and also what can be done to help get that horse to a more optimal and comfortable "way of going," as they say in horse-speak. Adding the physical understanding of proper trimming and shoeing was a natural extension to her massage practice.

I admit to being a little nervous about offending our farrier, Mike. I like him, and he does great work, so I figured he would have suggested traction shoes to me already had he felt it was warranted. But when he called to confirm our appointment and I asked him what he thought, he actually sounded excited and immediately suggested trying an eventer shoe. It's somewhat like the racing shoe, grooved most of the way around but slick in the back so there could be a little slip in the heel. To say I was relieved would be an understatement, and Steve (who handles all the farrier appointments these days) said Mike was surprised we hadn't asked for them before. Hopefully I can use this experience to convey to Mike that we do value his experience and opinion and--more importantly--are willing to hear it.

Yesterday, I got to watch Bar in action with his new shoes for the first time and could actually see a bit of a difference. He seemed to be coming under himself much better, and to be reaching out more in the front as well. He was frisky, having had a pretty mellow week due to my crazy schedule and more rain, but he settled into a solid canter both directions, as well as a balanced trot--getting into frame easily and nearly automatically.

Was it the shoes? That remains to be seen, but with both Karen and Mike on the same page, it is certainly worth trying.
Posted by Jessica Boyd at 12:46 PM

I think that one of the signs of a truly good farrier is a willingness to listen to the horse owners thoughts and ideas. And the ability to address them with something other than a "I'm a farrier, you're not, and I know best" attitude. They will also take the time to answer questions and educate the owner.

Once I took the time to truly educate myself on hoof care, I found the need to find a new farrier. A decision I have not regretted.

Thanks, BR--I am so glad to have a farrier that is willing to listen to me and my questions.

Not to mention he shows up on time, calls to confirm appointments, deals with the dancing TB (AND keeps shoes on him).