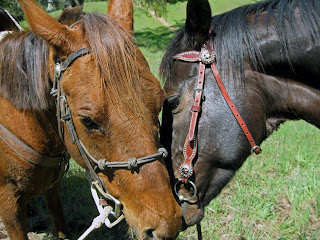 Solo as in sans parental unit, that is, not completely on her own. She and Manna--the owner of Bar's nice twin--went out to Lake Sonoma today. When Katie stopped at my office to grab the camera and I told her I was trying not to worry, she said, "You're having a heart attack on the inside, aren't you?" Um. Yeah, a little bit.

As it turned out, I was actually too busy at work to do much worrying, which is probably a good thing. Everything went really well for them, and they had a great time, too. The horses trailered fine, the trail was in good shape, and many obstacles were conquered. Katie was really proud of Sammy, especially considering it was only her second trail trip ever.

Sammy and Romeo got along much better than Bar and Romeo do, possibly because Sammy is a) female and b) less bossy. Actually, Katie says they work together a lot like Bar and Lena do when we're out--when one gets nervous about something, the other will take the lead.

Now I really want Bar's knee to get better! (It's no worse, at least, and the vet is coming out tomorrow.)
Posted by Jessica Boyd at 9:29 PM