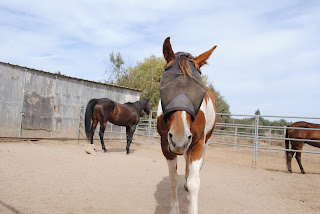 We have always described Lena as our alpha mare--confident and exhibiting "let me handle this" behavior.

We assumed Bar accepted Lena as his alpha as well. He would usually defer to her on the trail if there was something he didn't want to try, look to her when he was afraid or needed reassurance, and stay close to her in new situations.

In fact, we had always worried about putting them out together, mainly over food issues. Lena is very food-focused, and Bar will wander off and leave his food because food is not an issue for racehorses. It's here when they need it and you don't have to fight for it. We were concerned that with her alpha tendencies and his mellow attitude, she'd eat it all, get fat, and Bar would get less and drop weight.

However, we discovered a new dynamic up at Slide.

We turned them out together the last night we were there, just to see how it would go. The first feeding, I was able to spread out the hay piles to keep them apart. When I went out to check on them later, Bar was nibbling on Lena's pile and she was watching him from a few feet off, looking forlorn--even though his bigger pile of hay was sitting uneaten behind her. She did eventually go finish it off, but in the meantime kept a very definite sphere of space between Bar and herself. If he moved, she moved away.

The next morning, as I walked up with two flakes of hay, I was faced with both of them coming towards the same corner. As I was trying to figure out how to split them up, Bar pinned his ears and bared his teeth and chased Lena uphill away from where she had been fed for the last four days. And she went.

And the other interesting piece was that Lena--the feeding time stress queen--was calmer with him in there.

There is surely more to this story.
Posted by Jessica Boyd at 9:24 PM

Email ThisBlogThis!Share to TwitterShare to FacebookShare to Pinterest
Labels: alpha mares, Bar, being the alpha, Lena

Herd dynamics. Expect the unexpected. It sounds as if it may have turned out best for both Lena and Bar.