This is really Katie's story to tell, but she gave me permission to tell part of it. Hopefully I get it right, but she'll correct me if I don't.

Katie has been working with Sammy for close to a year now, and Sammy is a wonderful mare. She is great on the trail, loads and hauls well, and responds well in the arena. In other words, she's pretty well trained for just about anything. Most people would love a horse like that, a horse they could just jump on and ride no matter what the situation. 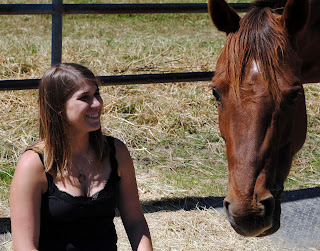 Katie has never been like that. Not ever. Which is why we ended up at Slide, where we found Lena, and why a horse like Calabar even entered the realm of possible horses for me.

In other words, there wasn't anything Katie felt she could learn from riding Sammy. It was a hard decision for her and she waffled back and forth. She likes Sammy a lot, had had a great year on the trails, and gained a lot up at Slide this summer.

But it wasn't enough. Katie would get on Lena and feel not just the power, but the challenge of working through things with a horse to get that link, that moment when it all clicks. Right before that moment they try something new and you laugh and start again.

So she made the hard decision that it was time to look for a new home for Sammy and a new horse for herself--one that would give her not only the challenge, but the bond she was looking for.

As it happens--call it fate, kismet, coincidence, whatever--the friends we got Bar from had a lovely four-year old gelding they had decided wasn't cut out for the track. He can run, he's fast, but didn't like competition and just isn't a racehorse. In fact, in all three of his races, he finished next-to-last.

This is Forrest View: 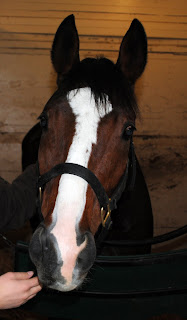 Steve and I had met Forrest and knew he was a lovely, calm, and affectionate horse. Athletic, too. We were even at his first race in Santa Rosa, and got to see him parade around before he ran. 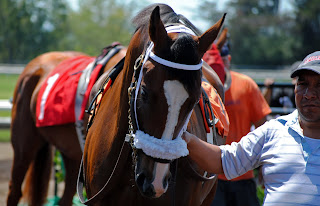 But what we really noticed was how snuggly he was with Devon. And how much he liked attention and affection. Then we wondered a little bit if he was really going to make it as a racehorse. 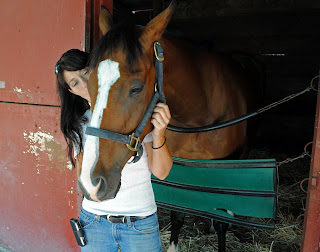 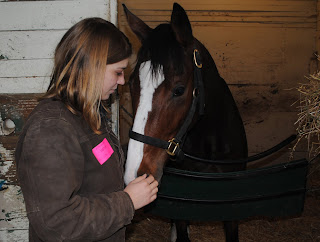 The story will no doubt unfold further and flow in whatever way it goes. It will be a journey for Katie, for Forrest, and for those of us lucky enough to watch.

Side note: If Lena and Bar had been able to reproduce, Forrest could certainly have come out of that combination!
Posted by Jessica Boyd at 6:21 PM

Forrest is a good looking boy. Glad to hear the track didn't work out for him. I must have missed it along the way, but when was Sammy sold?

Wonderful news! He is adorable!