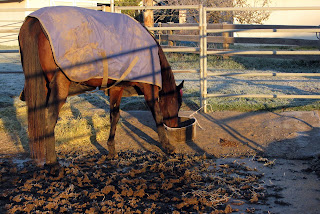 Bar doesn't really like mud, and worse yet, standing in mud is really hard on his feet. He has fairly typical Thoroughbred feet--thin walled and flaky hooves. After last year's wet winter, our farrier was pretty insistent that it would help keep shoes on if we could get the big, brown horse out of the mud. It's either that or invest in a lot of iodine. 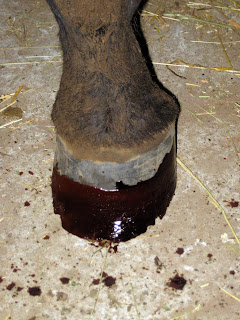 So, one of the projects Steve and I knew had to get done before the rain really got started was to fix Bar's pen, help it drain better, and add more mats. Peter improved things a couple years ago by adding mats in the front, but they were a little too angled and the water coagulated at the bottom and some of the less graceful among us found them challenging to negotiate when wet and slippery.

The goal is to get away from the swamp his pen becomes and give him a good place to stand and eat. Here is another before shot, sorry it's so dark. That puddle is at the bottom of the existing mats and in front of his water; the other big puddle tends to form on the other side where he eats. 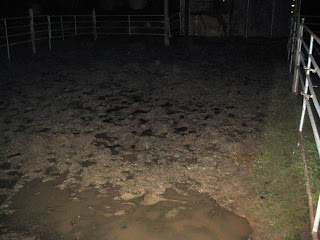 We started with drain rock, which we worked under the edge of the mats to lift up the angle there, then start to fill in the gully in front as well. 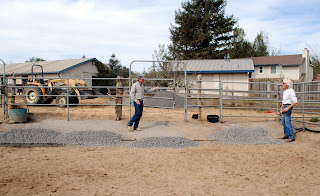 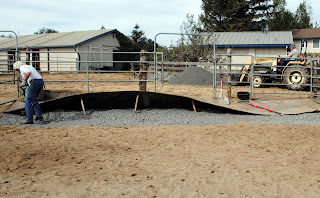 Then some road base on top of that out about four feet to bring the front of the paddock up several inches. The road base should pack down pretty well under the mats, too. 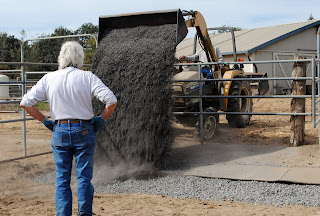 More spreading and evening out lumps under the mats, and we have a nice base upon which new mats will go. 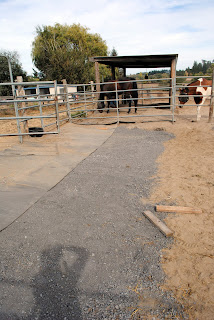 Unfortunately, we didn't realize the mat store closed at 2 p.m. that day and won't open again until Monday. While we're both at work. Originally, Steve had planned to do the gravel on Thursday and Friday after we got back, and the mats on Saturday, but we didn't have the tractor help until yesterday, so things got a little pushed.

Bar should be okay, though we'll probably have to add a little more and smooth it all out again before slapping down the mats and anchoring it all together.

Of course, it also rained today, so Steve got to see how well it would hold up even without the mats when he went out to check on everything today. Where was I? Oh, that's the last bit of the story.

While we were working on his pen, we put Bar in with Lena. We'd had such a good experience at Slide and knew this wouldn't be a long stretch, so thought it would be fine. And it was. For them. The difference this time is that Lena was in season, but even with that, they were both mostly calm with only minor chasing and squealing. Still, small space for a little over a ton of horse, let alone 125 pounds of puny human. 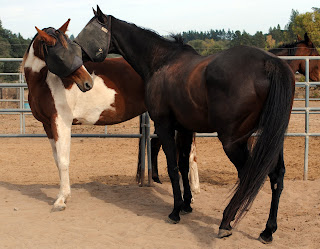 Katie suggested we move Bar in with Sammy since Lena was being so, um, clingy, but we didn't. As usual, Katie was right.

I had actually gone into Lena's pen to get Bar and put him back, but stopped to help Steve fill in a hole at the front of Lena's paddock. I was leaning the left side of my body up against the pipe panel, moving gravel and packing it down with my feet, when I heard a squeal and looked up to see 1,200 pounds of spotty horse being chased by 1,200 pounds of Thoroughbred--both headed right into my corner of the universe.

I became a human cushion between her chest spot and the pipe panel, before she pulled back and I dropped unceremoniously to the ground trying to catch my breath.

I am so done with injuries! And so mad at myself for getting into that predicament. Katie blustered at me, covering up worry with being mad. Steve told me it would hurt worse today than it did yesterday, and it does. Nothing appears broken, just very, very bruised and sore. Not as sore as my ego, but oh well.

So until I can turn my body without it sucking air out of me, we'll be doing ground work. Poor Bar. He really prefers that I ride, but I think this time I'll try to heal a little more first.

At least it happened after we got back from Slide, and I suppose I can chalk this up to another "learning experience."

I think I need to try for less-painful lessons.
Posted by Jessica Boyd at 12:38 PM

We just started filling in our low gate areas with limestone screenings too. It's been very dry here, but we do get quite a bit of mud, which is awful, especially for shod horses. Most of ours barefoot or just front shoes.
You may want to try Bar of Farrier's Formula, the concentrated one. Our vet/chiro said it's the only thing she's seen that actually improves the hoof quality. You should start seeing new growth after about 3 weeks. Keep using it until the whole hoof has new growth to the bottom. Takes a while but it is worth it. Also, joint supplements such as HA, glucosimine and chondhrotin can have a big impact on hair and hoof quality. Omega oils too. Our horses get a squirt of Cocosoya oil with feed.

Thanks, we actually have been using Farrier's Formula since we got him and I think it has helped a lot. Last winter, even with all the rain, his shoes stayed on better than the year before. Getting him out of the mud will really help, too.

He needs joint supplements, too, though, and I need to get him back on those as it gets colder.

Ouch - hope you aren't too sore!

The winterizing should pay dividends. Bar & Smokey have the TB feet in common. Having a place to get out of the mud has vastly reduced the number of winter abscesses we've gone through.

I feel your pain, literally. Broke my ankle in March, finally started getting around really well in October, then my gelding stomped on my foot (same foot of course) and cracked a bone. I'm pretty sure 2010 is a cursed year and that 2011 will be a ton better. I'll keep my fingers crossed for both of us.