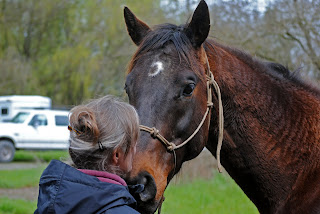 It's a Thoroughbred, not a dragon
Non-Thoroughbred people often look at Calabar like he's a fire-breathing dragon, and sometimes that's justified. He can be a fairly dramatic horse when something surprises, scares, or even just concerns him--sometimes just when he wants his own way. And it used to be he would act out--bolt, spin, otherwise argue--when he just didn't understand what I was asking him to do. After all, the life of a racehorse is fairly (pun intended) straight forward. Go forward really, really fast. Slow down at the end. Have your picture taken when you win. Oh, and pee on command, too.
Not very complicated.
Side passing? Small circles? Backing up? What on earth would a horse need those skills for? We won't even discuss neck-reining, inside leg, and obstacles.
As I've said before, watching Katie re-train Forrest has made me realize that Calabar needed a little more specific input from me in the beginning, possibly a little more patience and understanding. I'm not beating myself up at all. It has all turned out fine and I've learned a lot, as has Bar. I've learned to communicate as clearly as I can, take little successes from him, and reward him for the try. He's learned that I'm usually asking something for a reason and to just give me a second to explain it better if it doesn't make sense immediately.
One of the key things he has taught me is to give him time and head space to think about a situation. Some horses freeze and giving them time to think is bad because it just makes the inevitable explosion bigger. With Calabar, he explodes first--dancing sideways or in circles to put distance between himself and whatever monster he perceives. I've learned to sit deep, give him a moment to calm down, face whatever it is, then move back into work. It seems to help. Maybe acknowledging his reaction and then moving on gives him confidence to move on with me, versus focusing on the reaction by over-correcting or stopping altogether.
One-on-one, we're doing a lot better, but sometimes situations arise that bounce us out of our little isolated universe. It helps when it is another horse-and-rider combination I trust--like Katie and Forrest or Steve and Lena--but it all offers training opportunity for both Calabar and me.
For example, he is really funny about other horses being in the round pen when he's in the indoor arena. He especially doesn't like when Peter is in there cracking the lunge whip. It leads to wide-eyed staring and rapid backward-and-sideways travel away from the round pen--preferably putting us way at the other end of the arena.
Katie and Forrest offered us an opportunity to work on that yesterday. I had already warmed Bar up in the round pen and saddled him when Katie brought Forrest in and proceeded to work in the round pen. Bar and I walked into the arena and he was immediately concerned. Ears forward, lips tight, white showing around those beautiful brown eyes of his. I took a deep breath myself and completely relaxed my posture, talking to him the whole time. "It's just Katie and Forrest, you know them," I said. He and I walked over to the far corner and just stood and watched. I stroked his neck and fiddled with the saddle until he cocked a rear foot and softened. Then I bridled him and we stood a little more. Then I climbed on and we stood a little more. We worked on turning small circles, some neck reining, and walking over obstacles--mainly on keeping his mind on what we were doing versus what might or might not be going on in the round pen.
When Katie and Forrest came out of the round pen, Bar wanted to say hello, so we did. Then when Katie got on, Bar wanted to follow them and hang out. I didn't let him and instead we did some trot work around the outside of the round pen and he not only paid attention, he stayed on the circle, side passed at the trot, and even slowed to a nice trot I could actually sit.
So I let him go say hello to Forrest and Katie again and got off. Yes, I could have worked him more and harder, but he knows how to run. I want him to learn how to think, how to relax, and to trust.
He chose that instead of his wild-eyed, fire-breathing dragon impression. Too bad his doubters weren't around to see it, but I was and he was and we're the ones who really count anyway.
Posted by Jessica Boyd at 1:00 PM

My ottb had a major reaction to minor stimulus yesterday - it was windy on our grazing walk.

The good thing is he used to spin and bolt. Yesterday he made silly faces and popped up a bit - didn't even get to the end of the lead rope.

I reckon it's really us who are learning to manage our reactions ;)