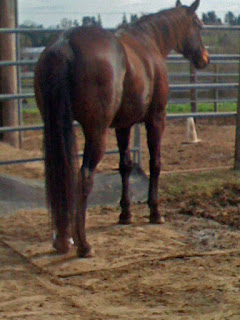 This latest experience has not only given me plenty of time to contemplate the things Bar and I need to work on, but has resulted in lots of support and advice from both my local and online horse communities. The advice has ranged from putting him out to retirement, to more ground work, training and lessons for both of us, and even talking to an animal communicator to determine what the trigger was that has him suddenly acting out after a year of good work and progress.

At the moment, the only option I'm not looking at is the retirement one.

Honestly, I get it. Something has to change with this horse and me because I can't keep getting hurt. But walking away from him jangles wrongness against every nerve in my body, and even my practical side can't ignore the gut feeling digging it's heels in against the wrong path. I guess that makes me crazy or stubborn or both, but he's mine.

We've been doing ground work all along and both Katie and Steve are skeptical that it will help to do more, but I continue to believe in it--especially right now. I've also realized the ground work I've been doing hasn't been as effective as it could be for a lot of reasons, all of it snowballing to our current state of affairs.
There is no question in my mind Bar and I both need more training. I've got a couple options, both at my current barn and with a trainer Katie used to work for. I haven't decided which is the better choice, yet. The latter would mean moving Bar for at least a month to a new barn, which might help him with his herd-bound-ness with Lena, but might also mean time lost to settle into new surroundings, only to move back again. The former is more convenient for us, and while convenience shouldn't be the top priority, his training could start now before I can get back to riding--probably a good thing.

I also haven't necessarily ruled out an animal communicator, and have two good references to fall back on. Yes, I know it sounds a little out there (I am from Berkeley, after all), but if all else fails, it would be interesting to hear what they had to say--frankly, I'm also incredibly curious about this field.
However, I suspect there are things I already know. The last six months have not only been icky, cold and rainy, I've been busy and distracted by my job. Even when I would take time to work with Bar, I was not necessarily present or challenging him in ways that went beyond keeping his body loose. In other words, I wasn't working his big brain or building on our relationship, I was circling him in the round pen just to get him out, getting on him bareback some, and not even doing that as often as he needed.
Six months ago, he would tolerate my sloppy, often out-of-balance, posting. He would stop when I shot too far forward and let me adjust myself, sighing softly as I did so. He would give me a nice relaxed canter and slow to a trot simply when I shifted my weight. Again, I was not doing this particularly gracefully, but he cooperated. He listened. He didn't argue.
There began to be little signs. Not standing at the mounting block for me, grabbing at the lead rope when I'd loop it over his head to ride him bareback, not actually nipping but making the motions when I'd do some of our ground work exercises (especially side-passing). I'd correct him, but not aggressively, and keep doing what I was doing with him, figuring that was enough. Gradually, I noticed a bit of a disconnect between us. Where he used to follow me all over the arena, he didn't anymore. When I would stop him in the round pen, he would turn and face me, but not come in to me. Hindsight, of course, is slapping me on the forehead at this point.
Since I got hurt, we've only had a few supervised exercise sessions, but the last one I handled on my own after Steve brought Fuzz-Meister down to the round pen. Every one of the last few times I've worked him, he's been gentle around me, respectful, and watchful. (And I don't think it was just the scary crutches.) Yesterday he worked his little heart out, and came in to me when I stopped him, but stayed out of my bubble when I held up my hand. He side-passed willingly and backed softly and never once hinted at nipping. I was tougher with him, and clearer in my commands and expectations. He was responsive, though it took him a little longer to relax than it used to, but he seemed calmer and happier at the end of it all, too.
Our journey forward depends on many moving parts, parts that need to learn to synchronize with each other. My seat needs work, his manners definitely need work, and training is a must for both of us--I know this. But I can't forget to listen, to actually pay attention to what is going on with him, and then react quickly, decisively, and consistently within the energy of the moment. That may be easier said than done for awhile, but the pieces of the puzzle are all there--we just need to put them together.
Posted by Jessica Boyd at 11:39 AM

Sounds like you're getting things in order. Bar is too special not to work out with him, and a recognized and recommended trainer is probably a good idea. Love,

And be sure, no matter how good you think he is, that you take good care of yourself first! Good musings... sending you good energy... (PS, I've used communicators and the good ones are special... most are average and everything should be taken with a grain of salt.)

You are obviously a very smart, intuitive person (even as you now recognize you didn't always listen to what Bar was saying to you). You guys will SO get through this, I have no doubt.
Forgive me if you covered this, but how is he in his living situation? You mentioned he is a little herd bound with Lena. How much turnout is he getting? Does he mostly seem content or sometimes stressed in his surroundings? I only ask because Miles was a different horse once he was secure in his environment and even more so when he transitioned to pasture board 24-7 with a steady gelding he adores, but is not herd bound to. I think sometimes gelding/mare relationships in turnout can be more complicated for a variety of reasons.
Good luck! Again, I know you two will get there.