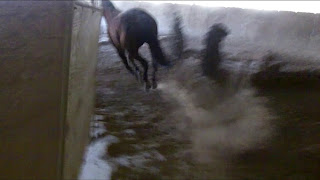 No, not taken yesterday, though it could have been
I had another tumble off Bar yesterday and it has left me very sore and, worse, feeling pretty dumb. Not only am I nursing a bruised back and strained muscles, I'm stuck inside on a beautiful, sunny spring day with nothing to do but reevaluate the training of this big, brown, opinionated horse.
Ironically enough, it is nearly exactly a year since I came off Lena and broke my arm. Luckily, nothing is broken this time, but the circumstances are similar in one way--I let him get too far out of bounds. Not necessarily that exact instant, but it's been building up bit by bit over the last few months.
Some of it is probably the lack of consistency in working him over the last six months. He had been really good when he was getting regular attention and input, but would still act up a little bit here and there. I would correct him most of the time, but I don't think I was always clear enough with the correction. Or tough enough, if you want the honest truth. With the lapse in his training, there was the obvious side-effect of additional testing from him and my more gentle corrections were brushed off like flies.
I've said before that it's a delicate balance with him--it's very easy to over-correct, especially if I'm scared or mad. But it would appear I've gone a little too far the other way. "Oh, that wasn't so bad, I'll just ride through it."
The thing is, I don't tolerate that behavior in people. Mostly, if you do something to me once, I'll let it go, but if you do the same ugly thing, I'm just not very soft and forgiving. People don't generally have drastic personality transplants, and neither do horses.
The other piece of this is I haven't always pushed him up to and past his point of frustration so we could work through it and build on what we're doing. If he was doing what I asked, I'd stop there, not offer him any challenge, and therefore neither of us was learning. Again, some of that was time, some of it was fear. How much could I push him before he'd act out and could I handle it if he did? Part of me knows knows I can handle him having sat through many a spin. Part of me is feeling a little beat up at the moment.
I was so sore yesterday, I could not get back on him immediately, but Katie took over and worked him hard. I did get back on when she was done and walk him out, though the charlie horse in my right hip made it very difficult to kick and my pelvis was so sore I could barely direct him forward, but I did it. Steve says I have no business on a horse for the next few days and he's probably right. Tomorrow should be even more fun, and driving the Miata is out of the question because of the strain in my left (clutch foot) hip flexor.
But if I want this horse to be the horse I know he can be, I have to get back on and redraw those boundaries. He can do it. I can too.
I might even forgive myself once I can walk without limping again, once I can climb in that saddle and give him the input he needs to release the good horse hiding inside. I love him too much, have worked with him so hard, to give up on either of us.
Posted by Jessica Boyd at 12:09 PM

Sorry to hear about your tumble. Glad nothing is broken, but bruising can feel just as crappy. Feel better soon!

Oh man ... I'm so sorry. The whole falling off thing is just so humbling, not to mention painful.

Take it easy. You're not in a race to prove anything.

Never feel dumb... horses humble us all the time... and, when it works, it's so fabulous because of what we did to make it so. Take good care of yourself!