Bar may know his body better than I do Bar's knee has been my nemesis (well, besides my own arm) since last month. We drained, then wrapped, and re-wrapped really to no avail. Anytime the wrap would stay on too long (and stretch) or slip, the carpus would puff up like a balloon.

So when Steve and I went to visit the folks we got Bar from and see their newest up and coming racehorse--Ginger, in the photo below--I told them what was going on. 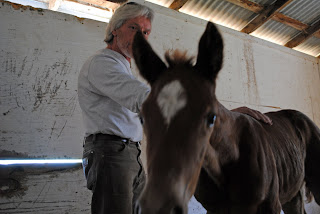 They recommended stopping the wrapping, starting to use DMSO, and giving him some Banamine since they are well-aware of his reaction to Bute.

So, Saturday afternoon, I soaked his knee in cold water and then did just that. He didn't like it, but he didn't pout as much as I expected, though he did stomp a bit after the DMSO was applied.

Sunday, Bar got very agitated in the cross-ties, whipping back and forth until Steve went to him and calmed him down. We decided to skip the Banamine and see how the joint did. If it was more swollen on Monday, he'd get more Banamine. If not, well, the less drugs he gets, the better.

Monday his leg looked better--not perfect, mind you, but better--so I decided to just run some cold water on it, clean the area, and put DMSO on it.

Bar had other ideas entirely.

Just opening a jar of SWAT (similar look and shape to the jar of DMSO) caused major agitation in the cross-ties--so much, I was half-way afraid he'd bust loose. He NEVER once threatened me, he just acted like someone was going to kill him. So, taking a few pages from Mark Rashid's book, I decided Bar was actively trying to tell me something. Very actively, since he's normally a pretty good patient.

All the doctoring supplies got put away and I went back out to him empty-handed. He immediately calmed down. Just to gauge the situation, I went back and got the DMSO, opened it, let him smell it--then watched his eyes get wide as the agitation come back ten-fold.

Okay. Obviously, he has an issue with it, and probably has good reason for that. That big, brown horse is sensitive--very sensitive--and DMSO is not a soft-spoken product.

So--as hard as it was---he got minimal doctoring. Again, back to Mark Rashid, it seemed that if Bar knew his body well enough to react to the DMSO, he'd be able to let me know if something was helping, too.

Watching him move was an easy test.

Yesterday, I walked him and let him play a bit in the round pen. He wanted to work but was very conscious of the joint. After he did a little bit, I ran cool water over the leg and prayed it was the right thing for him.

Turns out my horse may have been right all along. Tonight, the carpus is less swollen than it's been in a long time and he's moving on it with strength and confidence.

Luckily, some of us can admit when they are wrong.
Posted by Jessica Boyd at 10:12 PM

Some horses react to DMSO...including my mare. My vet recommended that I dilute it with some filtered water, and then mix that with Furizone to thicken it back up. Worked great, and no reaction! Maybe your boy could benefit from this as well.

I had a DMSO reaction myself, so I always have to wear latex gloves when I handle it. It really BURNS...so you know what they're feeling when they react!