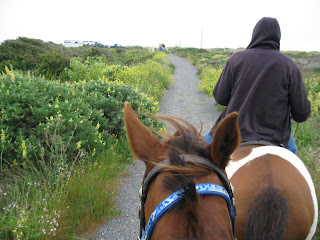 Being that one of us is still crippled and technically not allowed to ride her goofy ex-racehorse, Steve and Katie took Lena and Sammy on a trail ride adventure at the beach today.

It turned into a bit more of an adventure than they anticipated, thanks to a little dog whose owners a) should have been observing the leash law and b) are lucky they still have their little drop-kick dog.

Apparently this happened right as Steve and Katie entered the beach. A small dog, very aggressive, came charging up to them. Sammy went sideways, really quickly, and dumped Katie in the sand. Luckily, Katie held onto Sammy's reins because the dog continued to attack Sammy's ankles while the owner shrieked at the dog and repeatedly apologized to Katie. Probably the owner was too afraid to get close to Sammy, but the dog should never have been off-leash. Period.

Sammy never once kicked out at the dog or tried to run Katie over, and the only way Katie and Steve could get away was to mount up and run the horses down the beach because the owner had absolutely no control over her dog. Steve even turned Lena to the dog like it was a cow and Lena acted just like a cutting horse, dropping her head and pinning her ears back to try to control the minuscule terrorist. Unfortunately, the dog then went back to chase Sammy. This, by the way, was after the owner had captured the dog once, then let it escape again.

If it had been a Rottweiler or other large dog, this would not only have been unacceptable, but the dog would likely have been reported for its aggressive (and outright dangerous) behavior. It seems like people with little dogs don't always follow the same rules.

Katie and Steve went on to have a nice ride, though they also got in trouble for riding on the non-horse portion of Doran Beach. Oops. (They say the signs need to be bigger.)

I'm glad no one was hurt and I hope that person learned a lesson about their dog and horses. She probably has no idea how lucky her dog really is.

Meanwhile, Bar and I hung out at the barn and day-dreamed about our next trail ride adventure. Unruly dogs, beware.
Posted by Jessica Boyd at 4:54 PM

I think I'll do the honor of kicking the next dog that comes after my horse, thanks.

I agree. Dogs need to be on leash no matter how big or small. Some small yappy dog off leash charged my doberman recently (who was on leash). My Dobe pinned the little rat down but did not bite. The owner was terrified and I made sure to inform her that HAD my dog bitten her shit for a dog, it would have been her fault by not leashing her dog as the signs posted or having her dog under control.

Big or small.....dogs need to be on leash and under owner control at all times. Glad you story turned out ok.

Glad everything turned out ok! Whew, that dog owner is LUCKY. You'd think after one time of it escpaing, you'd think she'd tackle it in her arms, run to her car and leave, being thankful that after one scary incident, that her dog was OK.

OH!! My worst fear...not too much for my mare..she would have kicked...but for the dog and or owner and probably both!
I own "Bear mace" and will use it on human or animal alike, should things look bad for me or my steed.
I am sooo happy that your friend did not get too hurt or the horses..I totally would have taken names!

Once, at the beach head parking lot...some idiot(like your poor friends) let her Pitbull out of the car, off leash..it saw us with our horses(BIG DOGS) and I saw it running towards my mare's hind legs. I grabbed the Dressage whip quickly and jumped between my horse and the dog..it was so focused at my horses legs..it did not notice the whip-weilding-mad-woman..WHAP-WHAP-WHAP!!! Target achived and dog freaked out enough to go back to it's owner, with me yelling after it, something for her too!
KK

Why do I suspect that this isn't the first time that said owner has had difficulty controlling this dog?

I'm known to carry a six shooter when I trail ride (we have bears and cougars up here). I wonder how long I would let a situation like this deteriorate before ending it. Hope I never find out.

Glad everyone is ok.