Bar starts back to work 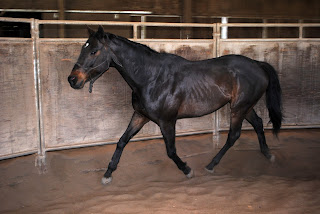 Unlike my arm, Bar's knee (well, carpus if one wants to be technical about it) has been cooperating and healing slowly but surely. It's not completely flat and it may never be pretty again, but there is no longer any heat in in it. He has been moving pretty comfortably on it for a couple weeks now, too, so we are gently returning to work.

Well, Bar is. One of us is still in a cast with a bone that appears unwilling to hold still and heal properly without surgical intervention. Dave over at A Tale of Two Buckskins has counseled patience. I know he's right, I'm just not sure I have any left at the moment.

But I don't have any cheese to go with that whine, so let's go back to Bar, shall we?

Prior to the carpus blowing up like a balloon, we had been working a lot on getting him to use his hind end to push instead of pulling himself along with his massive Thoroughbred shoulders. Progress was being made and he had started extending nicely through the shoulder and leading with his heel instead of catching and dragging his toes. This photo is from back in March and the position is lovely, as is the softness in his face. (That's his "ugly" bowed tendon in front, by the way.) 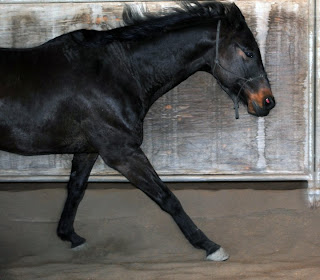 His convalescence has brought back some of his old habits, but watching him yesterday showed me he is paying attention to his body in a relatively new way. He caught a toe a couple times and then (on his own) shifted his weight back into his hindquarters, bringing the weight up off his front end and giving himself more control, more freedom, in front. It was so amazing to watch that subtle re-balancing--both because it means he is teaching himself that distinction, and because I could actually see the change in movement.

We have to work on his extension in front again, but it will come back. Two more weeks of ground work (my surgery is on the 11th) should help, and then we need to get out of the arena and back on the trails! Enough of circles, already!
Posted by Jessica Boyd at 11:48 AM

Glad he's back to working again - knees often stay puffy forever - my old gelding still has a puffy knee from many years ago - but he's sound.

Egads! I've been invoked as counseling patience. If only you knew...

Actually, it's one of the traits that horses have taught me to exercise. But that's a discussion for another time.

Glad to see Bar is back to work.